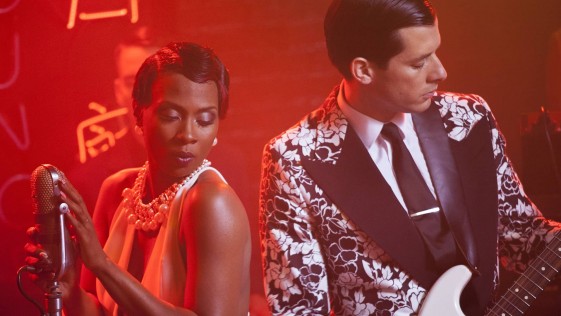 Today, Mark Ronson premieres the video for his song “I Can’t Lose” featuring Keyone Starr on Vevo – PRESS HERE to watch the video directed by Shomi Patwary (A$AP Rocky, Ty Dolla Sign) and featuring cameos from designer Waris Ahluwalia, actor Daniel Sauli, producer Emile Haynie and Trombone Shorty on the trumpet. The song has been heating up in the UK and is currently on the BBC Radio 1 playlist. The song was also performed on the UK show Alan Carr: Chatty Man – PRESS HERE to watch the performance.

Prior to the start of recording his critically acclaimed album Uptown Special (RCA), Mark Ronson and producer Jeff Bhasker were on a mission to discover the young female vocalist they had been imagining in their heads while writing the songs, the pair set out on a vast road trip across the US, driving through New Orleans, Baton Rouge, Jackson, Memphis, St. Louis, Little Rock and Chicago. While visiting gospel choirs in Jackson, MS they discovered 23-year old Keyone Starr and were blown away by her impressive range and presence. They immediately invited her into the legendary Royal Studios in Memphis to record “I Can’t Lose” and two additional tracks on the album.

Ronson’s critically-acclaimed fourth album, Uptown Special, debuted at No. 5 on the Billboard Top 200 and includes the global smash hit “Uptown Funk” featuring Bruno Mars. Following a meteoric climb up the charts, the record-breaking hit single held on to the No. 1 position on the Billboard Hot 100 for fourteen weeks – making it the second-longest No. 1 in history. The second single off the album, “Feel Right” featuring Mystikal has been streamed over 9.5 million times and was performed on Saturday Night Live, The Ellen Degeneres Show and Tonight Show Starring Jimmy Fallon – PRESS HERE to watch the music video for the track. Mark Ronson was awarded the GRAMMY for Producer Of The Year in 2008, also winning two more that year for his work on Amy Winehouse’s Back To Black.”