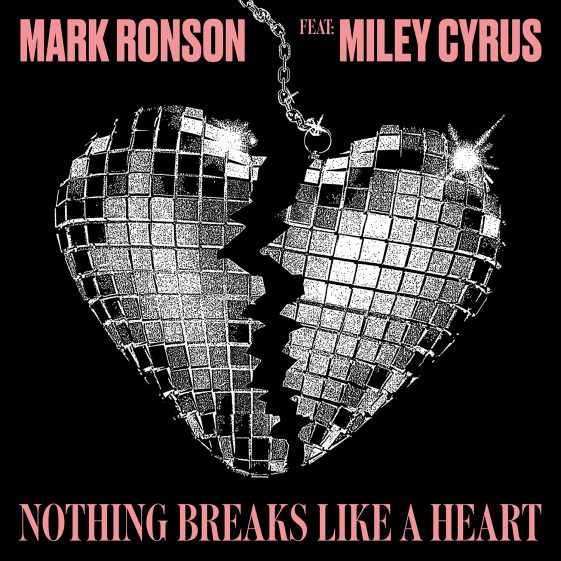 “Nothing Breaks Like A Heart” was co-written by Ronson with RCA label mate Miley Cyrus, along with Ilsey Juber, Thomas Brenneck, The Picard Brothers, and Conor Rayne Syzmanski. The track was produced by Ronson and co-produced by the Picard Brothers, with additional production by Jamie XX and recorded at Rick Rubin’s Shangri La Studios.

“Nothing Breaks Like A Heart” is the first single from Mark Ronson’s forthcoming studio album coming next year.

The high-energy video was filmed in Kiev, Ukraine and directed by WAFLA (We Are From LA) and executive-produced by Romain Gravas (M.I.A, Jay-Z, Kanye West, Jamie XX), a two-time MTV Video Music Awards recipient.

“Nothing Breaks Like A Heart” is Ronson’s first pop single as a recording artist since “Uptown Funk” which became a cultural and musical phenomenon. “Uptown Funk” won two Grammy Awards in 2015 including “Record of the Year.” Its video has been streamed over 3 billion times, and the single held the #1 spot on the Billboard Hot 100 Chart for 14 consecutive weeks, and is the highest-ranking song of this century and the 4th highest track of all time on the Billboard Hot 100. “Uptown Funk” is also the 10th song in music history to achieve diamond sales status according to the RIAA.

In this year alone, Mark Ronson has worked on a handful of hit releases. He co-wrote the #1 song “Shallow” performed by frequent collaborator Lady Gaga and Bradley Cooper, featured in Cooper’s directorial debut A Star Is Born. Ronson, as a member of supergroup Silk City with Diplo, released “Electricity” with Dua Lipa, a Top 5 single on the UK charts and nearing Gold sales status in the U.S.

Ronson is the Grammy-winning, go-to producer who has worked with iconic artists such as Amy Winehouse, Paul McCartney, Lady Gaga, Adele, Lorde, and so many more.

Miley Cyrus is one of the most influential artists in pop culture. Her sixth album, Younger Now, which was released in 2017, exceeded 1.7 billion streams worldwide. She has five #1 albums including her 2013 GRAMMY-nominated album Bangerz, which went Platinum in the U.S., five sold out world tours and 36 million digital tracks sold in the US alone.   She also recently served as a coach on NBC’s hit show, The Voice.

In addition to her success in music and television, Cyrus founded the non-profit organization The Happy Hippie Foundation to rally young people to fight injustice. Since launching, the foundation has provided direct support to thousands of homeless and LGBTQ youth across the country.

Mark Ronson and Miley Cyrus will be appearing on The Graham Norton Show December 7th and on Saturday Night Live on December 15th.