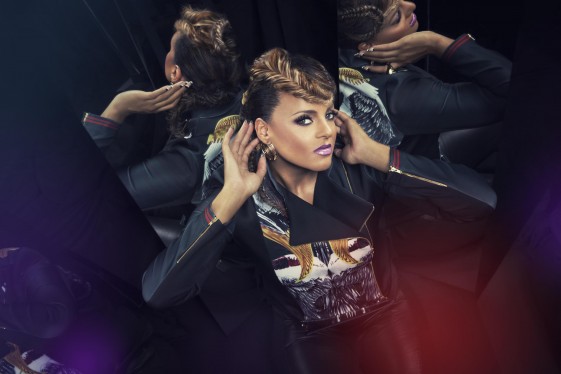 Multi-Grammy-nominated singer/songwriter Marsha Ambrosius’ cinematic new video for “Run” will make its broadcast premiere on Centric on June 11th. The video is directed by the renowned Delcan Whitebloom, most famous for his work with such artists as Taylor Swift, Demi Lovato and One Direction. The thought-provoking visual takes a look into the lives of various characters that have come to a crossroad where they must decide on whether to stay or move on from their current situation. Marsha acts as the video’s narrator, telling the story of each character through the ballad’s powerful lyrics.

The music video for “Run” received its official online premiere on June 9th via VEVO.com. On June 12th the video will be the “New Joint” on BET’s 106 & Park and Marsha will visit Revolt TV’s Revolt Live to discuss the video’s concept and her forthcoming album Friends & Lovers.

“Run” was co-written and co-produced by Ambrosius along with duo, Other Earth (Dillon Pace & Jenna Andrews). The impactful ballad is currently Top 20 on the BDS Urban AC radio chart and TIME.com officially premiered the single in April, calling it “one of her best compositions to date.”

The track will be featured on the musician’s sophomore solo album, Friends & Lovers, which will be released on July 15th, 2014 via RCA Records. Friends & Lovers will feature 15 tracks with production from Marsha, Pop & Oak, Da Internz, Eric Hudson, The Justice League and more. The LP will be available for pre-order on June 23rd and Target will release a deluxe edition of the album featuring three additional tracks on July 15th.

Gearing up for the release of Friends & Lovers, Marsha will be performing at this year’s BET Experience on June 27th and Essence Music Festival on July 5th. Marsha will also be included on the BET Presents Music Matters Vol. 1 compilation album. Available June 23rd, the project celebrates BET’s Music Matters initiative and will feature Ambrosius’ songs “Friends and Lovers” and “Music Matters Theme.”

Hailing from Liverpool, England, Marsha Ambrosius released her critically acclaimed debut solo album, Late Nights & Early Mornings in 2011. The album debuted at #1 on the US Billboard Hot R&B Charts and #2 on the US Billboard Hot 200 selling over 96,000 copies in its first week of release. The album also produced hit singles “Hope She Cheats On You” and “Far Away” which landed Marsha two Grammy® nominations. She also won the Centric Award at the 2011 BET Awards, won Record of The Year (Ashford & Simpson Songwriters Award) at the 2011 Soul Train Awards for “Far Away,” and capped off 2011 with a performance at the White House for The President and First Family at The National Christmas Tree Lighting. Marsha was also nominated for Best Female R&B Artist at the 2012 BET Awards.

Having a career that spans over a decade, 2014 will witness Marsha Ambrosius’ star shine brighter than ever before with her forthcoming album becoming a definitive moment in R&B history.