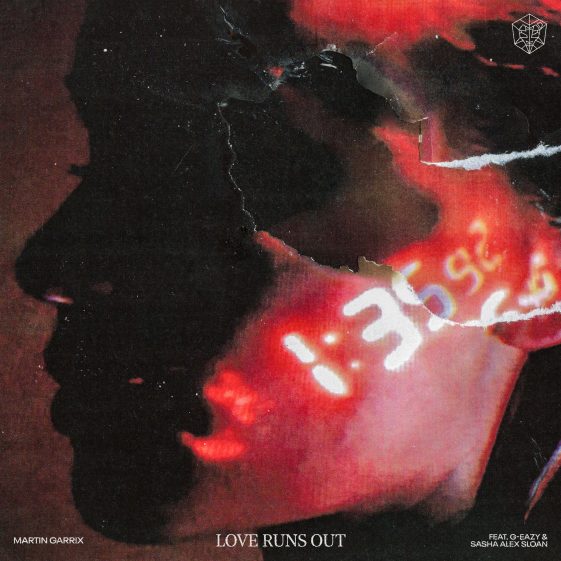 August 6, 2021 – Hot on the heels of his official UEFA Euro 2020 track “We Are The People” with Bono and The Edge, Martin Garrix today releases another big collaboration “Love Runs Out,” joining forces with multi-platinum recording artist and producer G-Eazy and singer-songwriter Sasha Alex Sloan.

On “Love Runs Out” Garrix once again explores a new sound. The single is a combination of hip-hop and fresh pop production with a melodic hook and emotional lyrics that are instantly captivating. G-Eazy’s signature swagger and Sloan’s mysterious and sultry vocals perfectly blend with Garrix’s hit making production.

Martin Garrix offers :“I’ve known Gerald since forever, so it was about time for us to release a song together. Sasha has an amazing voice, and she really completed the track. It’s a different sound for me, so I hope you guys like it!”

“Love Runs Out” addresses the feeling of being afraid of that point in a relationship when your love will fade out, with G-Eazy and Sloan questioning whether there would still be something left to mend when they fall out of love.

Martin Garrix – the name that belongs to one of the youngest and most successful DJ’s/producers championing the pop and electronic scene. Garrix has taken his expertise across the globe, by headlining festivals, breaking through territories, and collaborating with major stars including Dua Lipa, Khalid and Bono, and The Edge. Climbing yet another rung of his ladder to stardom, the hitmaker is now a founder of his very own label (STMPD RCRDS), an owner of a studio complex in Amsterdam, and a mentor to upcoming artists.

Now in his mid-twenties, seven years into a career that began with the Dutchman bursting through the EDM stratosphere by debuting the single ‘Animals’ back in 2013. The invigorating, dance-floor stomper soared to the top of the charts worldwide, ultimately altering the status of what would be considered popular music. Continuing his voyage to conquer the mainstream catchment area over the years, Garrix has become responsible for providing us with infectious and anthemic dance and pop records through the 2010s alongside a string of memorable collaborations from (2016) ‘In The Name Of Love’ featuring Bebe Rexha, (2017) ‘Scared To Be Lonely’ featuring Dua Lipa, ‘There For You’ featuring Troye Sivan, (2018) ‘Ocean’ featuring Khalid and last but certainly not least (2019) ‘Summer Days’ with Macklemore and Patrick Stump of Fall Out Boy.

Starting strong in 2021 with a billion Spotify streams accolade for ‘In The Name Of Love’ with Bebe Rexha and his collaboration with Tove Lo on ‘Pressure’, Garrix is spearheading into a big year. With the official UEFA 2020 song ‘We Are The People’ with Bono and The Edge finally releasing this year, and his side project AREA21 rolling out with impressive new music accompanied by animated videos, fans will hardly be able to take it all in.

Multi-platinum recording artist and producer G-Eazy has established himself as a leading force in the music and touring world. His third full-length studio album The Beautiful & Damned (2017) debuted at No. 3 on the Billboard 200, garnered two No. 1 radio hits – “No Limit” ft. A$AP Rocky & Cardi B and “Him & I” ft. Halsey – and has since been certified platinum by the RIAA. The 5x platinum single “No Limit” has been streamed over 1 billion times worldwide to date. The Beautiful & Damned followed his platinum-certified sophomore album When It’s Dark Out (2015), which featured the 5x platinum single “Me, Myself & I” with Bebe Rexha.

Known for his smooth raps, pristine production, and dexterous range, the Bay-area rapper has performed on Saturday Night Live, MTV Video Music Awards, The Tonight Show Starring Jimmy Fallon, Jimmy Kimmel Live! and many more. He has won a People’s Choice Award for “Favorite Hip-Hop Artist”, named one of Forbes “30 Under 30” and covered publications such as GQ Italia, XXL, Flaunt, and Rollacoaster. Additionally, he will continue his partnership with PUMA, recently announcing their first collaborative shoe is in the works. PUMA will also continue to support his philanthropy, The Endless Summer Fund – a non-profit dedicated to helping Bay Area under-served youth reach their full potential and strengthening the community – and their joint program, “From The Bay to the Universe” in which G-Eazy selects a group of developing musicians to support their artistic efforts.

After emerging late 2017 and appearing on a handful of high-profile collaborations, 26-year-old singer/songwriter Sasha Alex Sloan released her debut single “Ready Yet.” Since then, she has established herself as a true wordsmith, an artist’s artist, who crafts potent melodies filled with poignant lyrics. As a songwriter, Sasha has amassed over 3.6 billion streams by penning hits for some of today’s biggest artists. In 2018 Sasha released her first two EPs, Sad Girl and Loser. Her track “Normal” was heralded by Billboard as a “catchy introvert anthem.” These emotionally rich, left-of-center pop releases lead to her late-night debut on The Late Show with Stephen Colbert in 2019 with a performance of “Older.” That year, Sasha completed her first North American and European headline tours (sold out) and released her 3rd and final EP Self Portrait, which had her single “Dancing With Your Ghost” as Idolator’s 6th “75 Best Pop Songs Of 2019.” She also scored a #1 on the Dance Chart for “I’ll Wait,” her collaboration with Kygo. Sloan’s critically acclaimed debut album Only Child was released in late 2020. Sasha recently released her first taste of new music in 2021 with “when was it over?” feat. Sam Hunt.