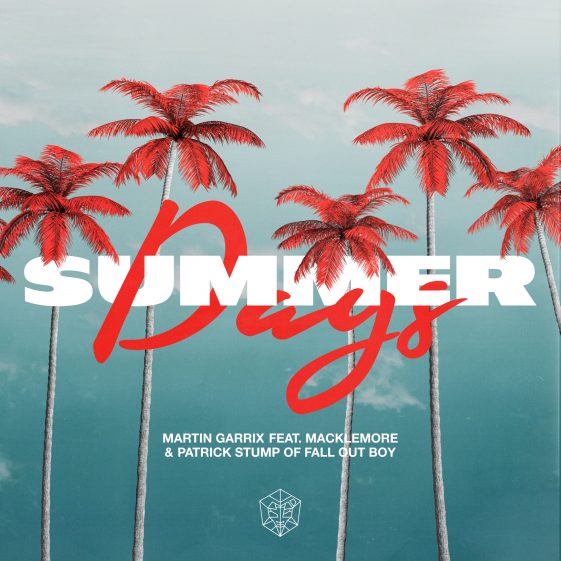 Of the collaboration Garrix said: “’’Summer Days’ is one of those tracks that makes you want to get in the car with your friends and blast it with the windows down. I’m honored to be working with Patrick and Macklemore on this track since I think they are both great artists. They are both very different in terms of style which gave the track new dimensions. I’m super happy with the end result!”

On working with Martin, Macklemore said: “I’ve always loved collaborating with artists from different genres.  Martin and I have talked about doing something for a while now, and just needed the right record.  When he sent me this, I knew it was the one.  Patrick was added to the hook and just made it that much better.  I’m hella pumped about the way it turned out and excited for the world to hear it.”

Patrick Stump on “Summer Days”: “I’m just happy to get to be a part of a fun song like this where someone lets me sing falsetto. Martin’s a hell of a producer and really knows his stuff. I was also pretty amped to hear Macklemore was involved as well. All in all, a fun project to work on.”

“Summer Days” comes on the heels of his latest club track, “No Sleep” ft. Bonn reaching #1 on US Dance Radio this week. This is Martin’s 4th time topping the US Dance Radio chart after previously reaching #1 with “High On Life” ft. Bonn, “Scared To Be Lonely” with Dua Lipa and “Ocean” with Khalid.

The track is the official follow up to Garrix’s single “Ocean” ft. Khalid which has enjoyed over half a billion streams and video views worldwide. “Ocean” is now certified platinum in the US by the RIAA.

Last month, Garrix was named #6 on the Billboard Dance 100 Artists of 2019 list which was announced in conjunction with Miami Music Week where he headlined Ultra Music Festival. He also hosted a stage for his record label STMPD where his developing artists performed.

Next month, he will headline the Shaky Beats festival in Atlanta as well as headline other festivals throughout the summer including Fuji Rock in Japan, Lollapalooza Paris, Secret Solstice in Iceland, amongst others. Garrix and STMPD RCRDS will host stages at Sziget Festival in Hungary, Lollapalooza Berlin, Tomorrowland in Belgium and more. He will also continue his residency at Ushuaia Ibiza this summer, every Thursday.

Martin Garrix has risen to global stardom in both pop as well as electronic circles. Dance music’s freshest talent has headlined festivals around the globe, founded a label and mentored other artists and won the #1 spot in DJ Mag’s Top 100 three times. His passion, ambition, drive and maturity remain unmatched in the world. “Animals” released June, 2013 was a breakout success and a game changer for the music industry. Reaching No.1 in the UK and many other territories, it proved that a hard-hitting dancefloor-oriented track could reach pop status, ultimately reaching over a billion streams across several platforms. The five years since have been marked by a quick march through the ranks of dance music, conquering stages all around the world and releasing more breakout hits including “In The Name Of Love” with Bebe Rexha, the highly acclaimed “Scared To Be Lonely” with Dua Lipa, “There For You’” with Troye Sivan, “Ocean” with Khalid and “So Far Away” with David Guetta, featuring Jamie Scott & Romy Dya. He was awarded with two MTV EMAs, a ‘Man of Today’ accolade from British GQ, a spot among Forbes’ ’30 Under 30’ list twice, Billboard’s “21 Under 21” list three times, and has also been honored on Billboard’s ‘EDM Power Players’. Garrix performed at the 2018 Closing Ceremony of the Winter Olympics in PyeongChang, South Korea in 2018, Dick Clark’s New Year’s Rockin Eve, performed on the The Tonight Show Starring Jimmy Fallon twice and Good Morning America’s GMA Day. With STMPD RCRDS now firmly established, he has free range to do exactly what he loves most: making music.