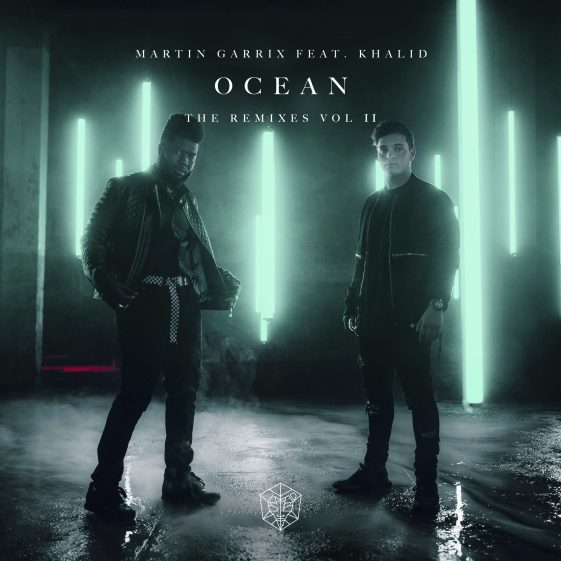 [New York, NY – August 3, 2018] Martin Garrix’s collaboration with GRAMMY-nominated singer Khalid has been another huge hit for the formidable producer, reaching #1 on Spotify’s Today’s Top Hits playlist and over 200 million streams on Spotify and YouTube since its release in June.  Today, Garrix and Khalid treat fans to the second remix package, Ocean The Remixes Vol. 2. Click here to listen.

The second remix package follows the release of Ocean The Remixes Vol. 1 which saw Garrix team up with Cesqeaux for a remix that takes the song into explosive new territory. Further remixes on the first pack come from a hugely diverse range of STMPD RCRDS artists, with Bart B More, Cazztek, Todd Helder, Silque, DubVision and Goja serving up everything from bubbling house to epic big room sounds.

Garrix’s Tomorrowland closing main stage set has already picked up 1 million views in 3 days. He wrapped his set with his new club track “High On Life” featuring BONN. The track was officially released globally the moment Garrix finished his set. CLICK HERE to watch the cinematic video for “High On Life.”

Martin Garrix has risen to global stardom in both pop as well as electronic circles. Dance music’s freshest talent has headlined festivals around the globe, founded a label and mentored other artists and won the #1 spot in DJ Mag’s Top 100 twice. His passion, ambition, drive and maturity remain unmatched in the world. “Animals”  released June, 2013 was a breakout success and a game changer for the music industry. Reaching No.1 in the UK and many other territories, it proved that a hard-hitting dancefloor-oriented track could reach pop status, ultimately reaching over a billion streams across several platforms. The five years since have been marked by a quick march through the ranks of dance music, conquering stages all around the world and releasing more breakout hits including “In The Name Of Love” with Bebe Rexha, the highly acclaimed “Scared To Be Lonely” with Dua Lipa, “There For You’” with Troye Sivan and “So Far Away” with David Guetta, featuring Jamie Scott & Romy Dya. Garrix’ musical achievements have not gone unnoticed. He was awarded with two MTV EMAs in 2016, holding the #1 spot in the 2017 DJ Mag Top 100, a ‘Man of Today’ accolade from British GQ, a spot among Forbes’ ’30 Under 30’ and another at Billboard’s ‘EDM Power Players’. Last but not least, he performed on The Tonight Show Starring Jimmy Fallon twice. Looking at 2018, the Dutch superstar is set to continue his winning streak. He kicked off the year with a performance at the Winter Olympics Closing Ceremony in Pyeongchang, Korea and with STMPD RCRDS now firmly established, he has free range to do exactly what he loves most: making music.

Five-time Grammy® nominated artist Khalid has seen great success since he released his first single “Location” right before his high school graduation. The song’s domination led to Khalid’s major label deal with Right Hand Music Group/RCA Records followed by the release of his debut album American Teen. The album received mass critical acclaim with Rolling Stone calling Khalid a “pop prodigy” and TIME Magazine stating, ““His thoughtful, relatable reflections on modern youth culture and the limitations of love are just as pitch-perfect as his soulful, measured delivery.” American Teen shattered expectations, as it stayed in the Top 200 for 51 weeks, peaked at #4, and stayed in the Top 20 for 48 out of the 51 weeks it was in the Top 200. The singer-songwriter has over one billion streams worldwide across all partners, his first single “Location” is certified 4x Platinum by the RIAA, and his previous single “Young Dumb & Broke” is certified 3X Platinum. Since the album’s debut, Khalid has garnered five 2018 Grammy® nominations including Best New Artist and landed on the cover of Billboard’s 2018 Grammy® Preview issue. He was also nominated for 2017 BET Award for Best New Artist, a Teen Choice Award for Choice R&B/Hip-Hop Song for “Location”, and a 2017 American Music Award for Favorite Song-Soul/R&B for “Location.” Khalid also won Top New Artist at the 2018 Billboard Music Awards, Best New Artist at the 2017 MTV Video Music Awards and an MTV’s Woodie To Watch Award. In addition to American Teen, Khalid has collaborated with some of music’s biggest stars. He has been featured on a number of songs including mega hits like Calvin Harris’s “Rollin” with Future, “1-800-273-8255” with Logic and Alessia Cara, “Silence” with Marshmello, “Lovely” with Billie Eilish, “Youth” with Shawn Mendes, and many more. Khalid’s current singles “Love Lies”, a duet with Normani, and “OTW” featuring Ty Dolla $ign and 6lack are burning up the airwaves. Khalid recently wrapped up his third sold-out North American headlining tour.