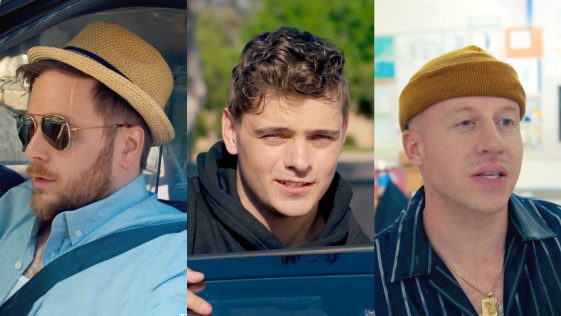 PERFORMING AT THE MTV MOVIE & TV AWARDS ON JUNE 17TH

The video first premiered today on MTVU and MTV Live along with live billboards in Times Square at 4pm and 7pm EST.

Shot in Los Angeles, the video is directed by Colin Tilley (DJ Khaled, Kendrick Lamar, Halsey) and features all three artists in a humorous narrative about an eccentric older woman that makes everyone she encounters sweat.

Martin Garrix, Macklemore and Patrick Stump will all take the stage to perform “Summer Days” for the first time together on the 2019 MTV Movie & TV Awards in Los Angeles on June 17th.

“Summer Days” is currently climbing the charts and is on Spotify’s Today’s Top Hits, and recently entered the Spotify Global Top 50 chart. In just under a month since release, the track has been streamed nearly 50 million times worldwide across all platforms. Garrix also just reached a milestone of 10 million followers on Spotify.

Martin Garrix has risen to global stardom in both pop as well as electronic circles. Dance music’s freshest talent has headlined festivals around the globe, founded a label and mentored other artists and won the #1 spot in DJ Mag’s Top 100 three times. His passion, ambition, drive and maturity remain unmatched in the world. “Animals” released June, 2013 was a breakout success and a game changer for the music industry. Reaching No.1 in the UK and many other territories, it proved that a hard-hitting dancefloor-oriented track could reach pop status, ultimately reaching over a billion streams across several platforms. The five years since have been marked by a quick march through the ranks of dance music, conquering stages all around the world and releasing more breakout hits including “In The Name Of Love” with Bebe Rexha, the highly acclaimed “Scared To Be Lonely” with Dua Lipa, “There For You’” with Troye Sivan, “Ocean” with Khalid and “So Far Away” with David Guetta, featuring Jamie Scott & Romy Dya. He was awarded with two MTV EMAs, a ‘Man of Today’ accolade from British GQ, a spot among Forbes’ ’30 Under 30’ list twice, Billboard’s “21 Under 21” list three times, and has also been honored on Billboard’s ‘EDM Power Players’. Garrix performed at the 2018 Closing Ceremony of the Winter Olympics in PyeongChang, South Korea in 2018, Dick Clark’s New Year’s Rockin Eve, performed on the The Tonight Show Starring Jimmy Fallon twice and Good Morning America’s GMA Day. With STMPD RCRDS now firmly established, he has free range to do exactly what he loves most: making music.