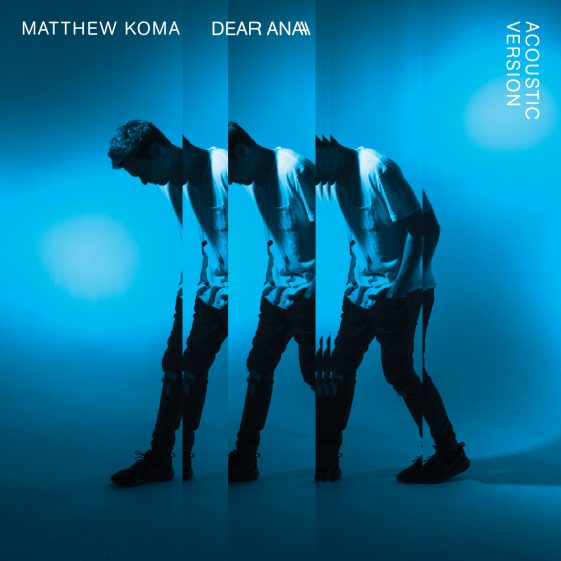 Out Now on RCA Records

What the critics are saying about “Dear Ana” Feat. Jai Wolf:

“It’s hopeful in its musicality, though heavy in atmosphere and lyrical sentiment. It opens with a wonky synth line and builds strength over the course of its three and a half minutes.” – Billboard

“Koma’s emotions are easily conveyed across to the listener both lyrically and with the assistance of Jai Wolf’s evocative, synth-sweeping production.” – Earmilk

“Dear Ana” is a slow-rolling and ardent ballad. Showcasing his songwriting talent, Matthew wrote this song last year during the early stages of his recovery from an eating disorder and is an honest portrayal of his struggle and emotions during the recovery process.

Comments Koma: “’Dear Ana’ is a song about my battle with an eating disorder that nearly killed me. I always had some issues around body image and body dysmorphia but didn’t have the strength to face it or talk about it openly. I became so mentally and physically exhausted and it didn’t get any better in the context of shooting photos and music videos, doing promo etc. I finally hit a rock bottom when it was a matter of survival, but admitting it was only the first step of a very long and hard journey. I wrote this song during my first week of recovery. It takes conscious decisions every day to continue overcoming the thoughts, patterns and fears…but with the right support and headspace, I’m grateful to be heading in the right direction.“

Earlier this week, Matthew opened up further about his eating disorder in a blog entry for the National Eating Disorders Association.

Matthew Koma is one of the most accomplished writers behind numerous smash hits including Zedd’s “Spectrum,” and GRAMMY-winning hit “Clarity.” “Hard To Love” was Koma’s latest single on RCA Records, which received fantastic response from the press. ThisSongIsSick wrote “Hard To Love” “features some of his best songwriting to date” and that says a lot considering the aforementioned successes.  EDM.com raves that “Koma’s writing on ‘Hard to Love’ demonstrates the songwriter’s penchant for infusing melancholic metaphors with a comedic nonchalance creating a unique track that’s relatable to audiences.”

Get it on Amazon Music: http://smarturl.it/DearAnaAcAmz

Get it on Google Play: http://smarturl.it/DearAnaAcGP