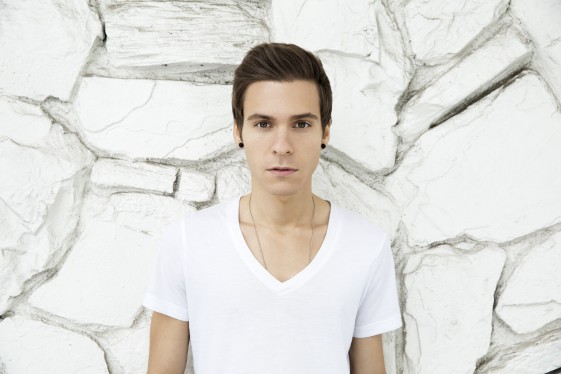 RCA Records is proud to announce the signing of electronic music trailblazer, Matthew Koma and the release of his debut single “So F**kin’ Romantic” available today. As a songwriter, vocalist, producer and DJ, Koma is a virtually unmatched triple threat when it comes to crafting hooks. With 8 Beatport #1s, 4 Billboard Top 10s, and a #1 Billboard single GRAMMY-award winning song “Clarity” which he co-wrote with Zedd, there is little question why Entertainment Tonight named Matthew Koma “the Man with EDM’s Golden Touch.”

Matthew Koma’s debut single on RCA demonstrates the realization of his signature style and showcases his multifaceted talents. “So F**ckin’ Romantic” is the next step in the evolution of Koma’s defining sound: his melodic word-play pairs smirk-wearing verses with infectious feel-good, driven choruses and deep anthemic rhythms.

“I naturally gravitate towards writing pretty serious songs, so I tried to balance the black coffee this time, and write something a little more light-hearted. My favorite songs tend to be ballads or heart-break-on-a-sleevers, but sometimes you just need to lighten the f’ up. ‘So F**kin’ Romantic’ is a caricature. It’s when you look in the mirror in the right lighting at the right time with the right Instagram filter, and have those few seconds of over-confidence where you’re Ryan Gosling’s middle ab and a John Hughes soundtrack is playing. It was fun to write, and it feels fun listening to it.”

Stay tuned for remixes of “So F**kin’ Romantic” out next week.

Koma is a genuine hitmaker who burst onto the scene with Zedd’s “Spectrum” and “Years” by Alesso, featuring and co-writing on both, as well as writing Sebastian Ingrosso and Alesso Feat. Ryan Tedder’s “Calling (Lose My Mind).”

Since then, Koma has been the mastermind behind various chart topping hits by DJ Mag #1 DJ Hardwell on his anthemic “Dare You,” Tiesto’s “Wasted,” Zedd’s “Find You,” and Showtek’s “Cannonball (Earthquake),” which landed at #1 on UK Dance Charts. The genre-bending artist has also featured and co-written with Giorgio Moroder, Steve Aoki, Afrojack, Sebastian Ingrosso, Fedde Le Grande, Audien, Dimitri Vegas & Like Mike, and more.

It has been a busy year for one of the industry’s most sought out songwriters and producers. So much so that RCA’s Britney Spears has called him for his talents, as well as other RCA recording artists including Kelly Clarkson, Gavin Degraw, Giorgio Moroder, Brooke Candy, Tinashe and Hillary Duff, to name a few. Proving to be more than just a pop-EDM talent, the Seaford born songwriter/producer is currently working with country mega star Shania Twain for her highly-anticipated comeback album. Koma also remixed Bruce Springsteen’s “Rocky Ground,” which The Boss chose as his radio/video single.

Koma’s music has been featured in Bud Light’s Super Bowl XLVIII commercial, as well as movies and shows such as Divergent and 22 Jump Street among others.

Anyone lucky enough to catch one of Matthew Koma’s solo sets has felt the passion and raw emotion he gives each and every night. When not playing on a massive festival stage, the headlining DJ/producer can be seen in Las Vegas at his Wynn Residency, and has graced many notable parties at London’s Ministry of Sound, Halo in Germany, and Pacha New York and Dubai, to name a few. This summer he will be making his hometown debut at Hollywood’s Create Nightclub, as well as headlining club nights in San Francisco, Denver and Austin.