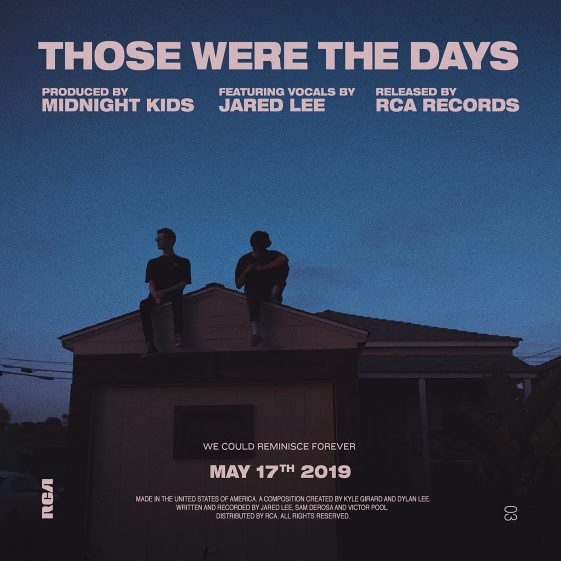 Midnight Kids Put Their Fans First In Campaign For New Single “Those Were The Days” Ft. Jared Lee

“Those Were The Days” is Midnight Kids’ first single of the year. Leading up to the release, they shared three recap videos on their socials where fans documented their day, shared some of their story, met Midnight Kids in person and heard the single before its release date.

The track follows “Serious” ft. Matthew Koma which Live Nation’s Ones To Watch describes, “[While] ‘Serious’ marks only the second official single from Midnight Kids…it shows the duo building on some very real early promise. Built around electrifying ‘80s-evoking production, it is a track that feels perfectly at home in the world of pop-minded dance as it does the lush textural world of indietronica.” Click HERE to listen.

The duo’s first official release was last year’s “Find Our Way” ft. klei, which has been streamed over 14 million times and reached the top 10 at Dance Radio in the US. Click HERE to listen.

At the close of 2018, The Kids were also featured on many “Artists To Watch in 2019” lists including Dancing Astronaut, Run The Trap, This Song Slaps and EDM Sauce.

They most recently wrapped a supporting slot on the Jai Wolf tour, made their first festival appearance at the Coachella’s Heineken stage event and played the Shaky Beats Festival. This summer will also see the Kids play at the Breakaway Festival in Columbus and Electric Zoo in New York. Previously, they have opened for world-renowned DJ, Alesso in a series of sold out dates including the Palladium in Los Angeles and Aragon Ballroom in Chicago.

Buy/Stream “Those Were The Days” ft. Jared Lee: http://smarturl.it/TWTD

Midnight Kids rally around a youthful sentiment crafted by dreamers, believers and late night rebels. In a world that prides itself on being more connected than ever, the same cannot be said about its people who tuck their fears, doubts and insecurities under the covers. Midnight Kids are rewriting the script, encouraging people to be comfortable with their story. Midnight Kids’ story began a bit over a year ago when Kyle Girard and Dylan Lee first met and instantly connected on a vision and sound they were both striving toward. Since then, they’ve been able put their distinct, 80s-inspired spin on official remixes for The Chainsmokers, Gryffin, ARIZONA and more. In June 2018, they released their debut single “Find Our Way” featuring klei, which ended up making its way onto the radio, earning the BPM Breaker on SiriusXM and more. Millions of streams later, they found their home at RCA where they continue to write their story and choose to live by a singular statement: “We are all Midnight Kids. Let’s tell our story together.”

Keep Up With Midnight Kids: