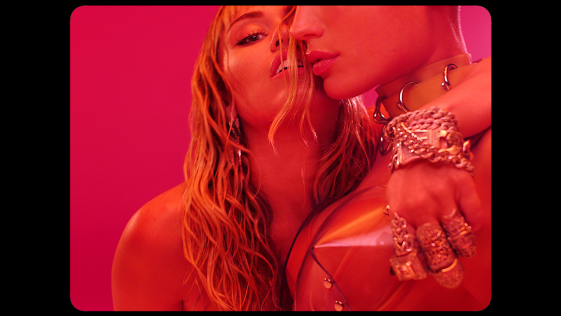 July 2, 2019 – Today, Miley Cyrus dropped the music video for “Mother’s Daughter,” from her recently released EP, SHE IS COMING.  The track garnered 44 million streams worldwide upon release. The video was conceptualized by Miley Cyrus and the director, Alexandre Moors.

Its release comes on the heels of Miley’s headlining performance at Glastonbury Festival this weekend, which received rave reviews, with NME declaring this is the “beginning of her very own rockstar era.” The set featured special guests Billy Ray Cyrus and Lil Nas X for “Old Town Road” and “Panini” and Mark Ronson for their hit “Nothing Breaks Like A Heart,” as well as Amy Winehouse’s “Back To Black.” In addition to playing her hit songs like “Wrecking Ball” and “We Can’t Stop” plus all 6 tracks from SHE IS COMING.  The pop infused rock set also had Miley performing, for the first time, her remake of Nine Inch Nails’ “On A Roll” and “Head Like A Hole” as her Black Mirror character Ashley O, donning a purple wig.

The featured performers in the Mother’s Daughter video speak about finding power and freedom in their own self-expression.

“As a black girl in a wheelchair who happens to be trans – I just want to have a good life and do good in whatever my endeavors consist of, regardless of what that might mean in the face of oppression. I do not identify or label myself as an activist, but that’s just because I care- and I think everyone should, activist or not. I fight for my freedom by being myself.” – Aaron Philip

“Sometimes I feel so helpless and discouraged because there is so much injustice discrimination and hatred in the world we live in…and now in particular under our current administration this dilemma is magnified tenfold! However I still believe there is hope!! We’re living in dark times but “this too shall pass”!! I pray that goodness will win and darkness won’t prevail!!” – Amazon Ashley

“I’ve always been a fighter. Maybe not always in the most productive way, but fighting for myself, a friend or even for a stranger who is being bullied has always been a part of my personality. Fat acceptance is based on the notion that all fat people, regardless of health, deserve respect. And it’s a battle that is fought every day by thousands, including myself. Social media’s accessibility allows us to peek in on others living their lives, but too often the conversation turns negative when there are fat bodies involved. People just love to leave awful comments on fat folks photos in order to feel superior and I promise you, not one of these commenters actually cares about the health, family, environment or whatever bullshit reason they give for their vile behavior towards a fat person. And really, how in the hell does health matter in the context of someone just posting a photo of themselves feeling happy and confident? (HINT: it doesn’t matter, stop pretending like it does) Next time you see a fat person posting pictures of themselves living their life, stop and ask yourself why you wish to spoil their joy. I guarantee that you can’t come up with a valid reason that isn’t based in your own ego gratification. Stop it and do better! We humans have a lot to learn, but we can start by fighting our personal biases and permitting people of all genders, races, sexualities, sizes, abilities and health levels to live harassment-free lives. Don’t fuck with their freedom to feel happy and beautiful right now, not just when society says it’s ok.” – Angelina Duplisea

“I try to live as authentically as I can – and I want to create a space where everyone else can do the same. I don’t want people living in fear – because of how they choose to identify and express themselves to the world. I want people to live and love freely. My existence shouldn’t be upsetting to people, but if it is, good. People like me and my community aren’t going anywhere. We’re coming into a generation where it’s way more accepted to express ourselves and our identities. – Casil McArthur

“Taking a stand for the women and queer community in skateboarding has brought me to life in a powerful way. It’s crucial to create space for marginalized communities every single day, and the platform I have through skateboarding is a perfect vehicle for this. There is so much love to share in the LGBTQ communities all over the world, and to be able to tap into this love through skateboarding is so beautiful. The queer community gives me so much fucking life. #LGBTQ #PRIDE” – Lacey Baker

“Imagine waking up and finding out the water that you have been drinking is poison, imagine the water giving you rashes and making you and your family sick. This has been my reality for the past five years and it’s why I fight so hard for my community and especially the kids. I’m Mari, you probably know me as Little Miss Flint, I’m 11 years old and a kid from Flint and I fight every single day to make sure my city is not forgotten and that our water crisis is fixed.” – Mari Copeny

“I had to fight my entire life to be seen and heard. I never felt prepared for the world. I never understood the significance of having self-worth. It was never instilled in me. My anxiety silenced me until I finally realized I had to express myself artistically to truly understand what freedom felt like. I had dance I had music I had my words, my voice, my truth and its as if every hardship I experienced in my life lead me to that moment. My voice is my truth and my truth is the blood of my art, it’s the pulse that allows me to fight for myself and for others to always be seen and heard.” – Melanie Sierra

We are a body of people so diverse in our needs, wants and desires. The only sure-fire way to insure that I am personally represented is to use my voice. This I know. What I don’t know is why I am fighting against an internal force that places passivity over activity and social conditioning over individuality. These forces cannot win because I crave a life of meaning, a life of strong human connection, a better world for my future children. I must do more than just sign a petition here of there… Sincerely, a late 20s millennial thats grasping how just deep everything really is. – Paige Fralix

“So pretty much in my every day life I tend to express my freedom through my fashion – it’s like my voice because I don’t like to say too much I like to leave everything open for interpretation. Thankfully i don’t really have to fight for my freedom but for those who do I definitely speak out and continuously rock out for them hoping to inspire the next girl like me. Activism to me is pushing the agenda of staying true to yourself and keeping it G (genuine) – I feel like if I continue to showcase and spread my message/story it’ll reach the masses. Activism is a group effort to keep it simple especially for social change more people should start within before getting involved imo – lots of biased/ skewed beliefs due to social media – start at home! If your words aren’t coming from the heart or a reliable source (not twitter!) who are you helping? Women like me young and old give me the hope to continue the fight for our freedom as dark skin women in the world! #BlackGirlsROCK” – Trydryn Scott

“I’ve been asked why I shaved my head, “you were so pretty with your long hair”. I’ve been asked why I pose nude, “it might hurt your career”. I’ve been told I need to smile more, “don’t be so serious”. What people don’t realize is that I do all this because I want to. It’s simple. I’m not afraid to be who I am and not who society says I should be as a woman. I don’t conform to the norms. Never be afraid to speak with your own voice and form your own opinions. Do whatever YOU feel like doing and whatever makes YOU happy. Empower yourself. Even better, let’s empower each other.” – Vendela

SHE IS EVERYTHING for F/W19