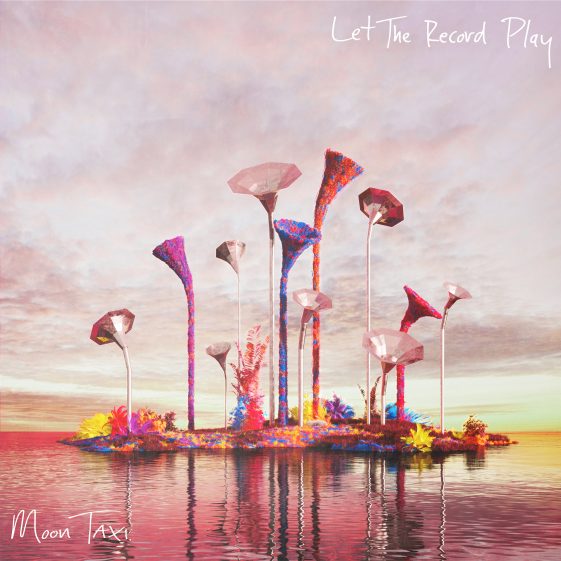 New York, NY – November 17, 2017 – Nashville’s own alt-rock-five-piece band Moon Taxi announce today the details of their highly anticipated fifth studio album, Let The Record Play, to be released on January 19, 2018 via RCA Records. This marks the band’s first album for RCA and is available for pre-order via www.ridethemoontaxi.com and all digital retailers HERE. Let The Record Play features 10 tracks – including their global streaming hit “Two High,” which is currently #1 at Triple A Radio, being played on Sirius XM’s The Spectrum, Alt Nation and Jam On, and has garnered over 64 million streams on Spotify alone. Fans who pre-order the album will be treated to the brand-new song and title track “Let The Record Play” as an instant grat track. PRESS HERE to listen.

Let The Record Play is a triumphant moment of rock-pop exploration that proves that Moon Taxi is a rare band that can address the temperature of our turbulent times while also providing the euphoric musical escapism we so badly need. Produced and mixed by Spencer Thomson (the band’s guitarist), Let The Record Play is a document of one of the most creative bands to emerge from Nashville’s immensely fertile landscape – and one that has been thriving on the festival scene for years, bringing their electric performances to Coachella, Austin City Limits, Bonnaroo and beyond. Beloved enough in their hometown to sell out two nights at the famed Ryman Auditorium this past October, this LP – and their new relationship with RCA – is certain to catapult them even higher.

The band recently released the official music video for “Two High,” the single off the upcoming album. The video trails the band and their fans throughout the world, backstage and on stage at their electrifying live shows that have earned them millions of fans. PRESS HERE to listen and PRESS HERE to watch the video.

Following the lead of the spirit of “Two High,” Moon Taxi sought to make a record that lends itself as easily to the home speakers as it does to live shows, blending the best of pop – great melodies, smart hooks – with lyrics that conjure stories and inspire real thoughtfulness. Bursting with emotion and endlessly playful approaches to instrumentation and orchestration, Let The Record Play, chosen for a track of the same name, melds so many multifaceted worlds: it’s gritty, edgy, tropical and restlessly hard-rocking all at once. And under Moon Taxi’s careful hand, it all feels supremely natural.

“If there’s one thing we want when people hear this record or see our shows,” says frontman Trevor Terndrup, “it’s to leave elated.”

Watch this space for additional details about the band’s first album via RCA.