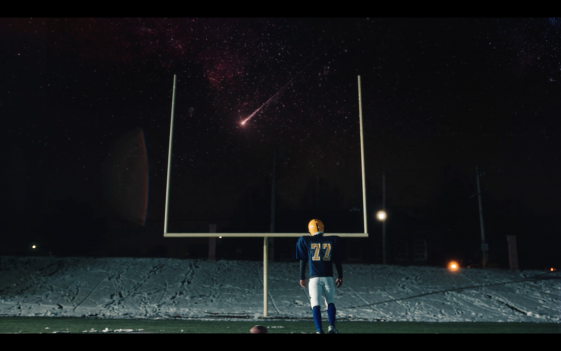 “Moon Taxi a jam band — that is, if its instrumental excursions weren’t so concise, carefully thought-out and frequently refined in the years they’ve spent touring.” – NPR

New York, NY – February 12, 2018 – Nashville’s own alt-rock-five-piece band Moon Taxi releases the video for their song “Not Too Late” via RCA Records. Following the lives of three different characters – each overcoming their own obstacles – the video perfectly captures the song’s yearning lyrics and ‘80s inspired guitar and shows that it’s never too late to achieve the impossible. CLICK HERE to watch.

“Not Too Late” is off of the band’s new album Let The Record Play, out now via RCA Records. CLICK HERE to stream or purchase the album. Tying into the album’s release, Moon Taxi performed their hit single “Two High” on The TODAY Show / Megyn Kelly TODAY. The song is a global streaming hit, reaching #1 at Triple A Radio, is being played on Sirius XM’s The Spectrum, Alt Nation and Jam On, and has garnered over 78 million streams on Spotify alone. CLICK HERE to listen/watch the video for “Two High.”  “Two High is also being featured in the 2018 Jeep Compass commercial. CLICK HERE to watch.

Let The Record Play is a triumphant moment of rock-pop exploration that proves that Moon Taxi is a rare band that can address the temperature of our turbulent times while also providing the euphoric musical escapism we so badly need. Produced and mixed by Spencer Thomson (the band’s guitarist), Let The Record Play is a document of one of the most creative bands to emerge from Nashville’s immensely fertile landscape – and one that has been thriving on the festival scene for years, bringing their electric performances to Coachella, Austin City Limits, Bonnaroo and beyond. Beloved enough in their hometown to sell out two nights at the famed Ryman Auditorium this past October, this LP, their RCA Records debut, has catapulted them even higher.

Trevor Terndrup (vocals, guitarist), Spencer Thomson (guitarist and producer), Wes Bailey (keyboardist), Tommy Putnam (bassist) and Tyler Ritter (drummer) also recently kicked off their Let The Record Play tour and are following it up with performances at Bonnaroo in June and Sloss Fest in July.

WATCH the Video for “Not Too Late”: http://smarturl.it/MTNTLv