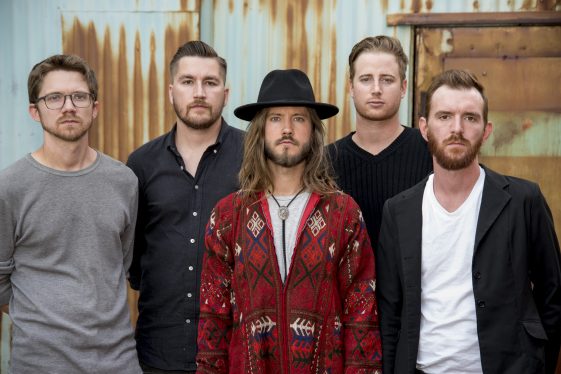 “Put ‘Em Up” Tour Continues Throughout September and October

New York, NY – September 11, 2017 – Nashville’s own alt-rock five-piece Moon Taxi has just signed to RCA Records. The band’s newest single, “Two High,” is nearing 50 million streams on Spotify, is in the Top 10 at Triple A Radio and is being played on Sirius XM’s The Spectrum, Alt Nation, and Jam On – CLICK HERE to listen. The track is currently in many of Spotify’s Global playlists, including Happy Hits!, Summer Party, TGIF, and Mood Booster and has charted on the Spotify Top 200 in 83 markets.

Trevor Terndrup (vocals, guitarist), Spencer Thomson (lead guitarist and producer), Wes Bailey (keyboardist), Tommy Putnam (bassist) and Tyler Ritter (drummer) continue the “Put ‘Em Up” tour on September 21 in Dallas, TX and will be on the road throughout the end of October with dates in Los Angeles, New York City, Nashville, and more. See below for a complete routing.

With four highly-praised albums under their belt – including their last LP Daybreaker (2015 BMG) that debuted #2 on the Billboard New Artist Chart – and over 88 million Spotify streams worldwide, the band has garnered national TV appearances on the Late Show with David Letterman, CONAN and Late Night with Seth Meyers, as well as a performance on NPR World Café. Many of their singles have been a part of commercials and TV spots including McDonald’s, BMW, Nashville, MLB, NFL and HBO Sports to name a few. The members of Moon Taxi are no strangers to the stage, and their energetic live performance has landed them numerous major US festivals appearances over the years, including making their debut at Coachella – performing mainstage – in 2016, plus they have performed at Governor’s Ball, Bonnaroo, Lollapalooza, Austin City Limits, Firefly, Hangout and Forecastle festivals.