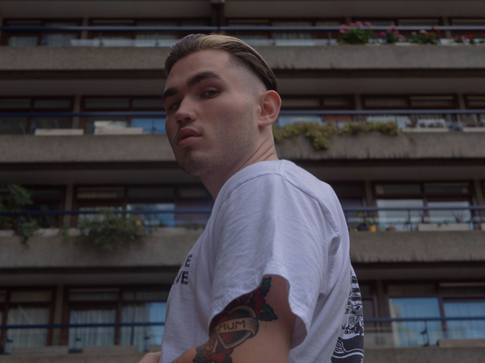 WHAT THE PRESS IS SAYING ABOUT MOSS KENA:

“Everything released so far is nothing short of amazing.”- Complex

Moss Kena’s voice is as distinctive as they come” – Complex

“A God-given gift of a voice…He possesses a multi-octave range that melts the hardest of hearts. The gentle fragility in his voice amplifies the transparency in his words.” – Clash

“Like Amy Winehouse, Kena mixes vintage and modern sounds together, crafting deeply personal R&B songs where the vocal is the main attraction” – The FADER

“on standouts such as ‘Problems’ he broadens the palette to…Stevie Wonder, Prince, Scritti Politti and peak Jam and Lewis with fascinating…results” — The UK Sunday Times Culture ‘Breaking Act’ piece

The five-track release features “Silhouette” produced by Rodaidh Mcdonald (The xx, King Krule, Sampha) and latest single “Touch.” ONE + ONE is available now to buy and stream on all platforms via RCA Records/Colt Club Records/ Ministry of Sound.

On his second EP, Kena explores familiar themes of love and relationships, old and new. ONE + ONE opener “Silhouette” is about “breaking out of an intense relationship and seeing the light in new possibilities” explains Moss. “Silhouette” is followed by an up-tempo electronic production on his new single “Touch,” and then an after-hours musing on finding your true love with “Back Again.” On EP standout “Ain’t The Same,” Kena reconnects with Toddla T for their second collaboration this year after summer’s uptempo banger “Real Connection.” The EP closes with a 90’s inspired slow jam “Better Off Without My Love,” a track written the end of a relationship and moving forward. Every track in Kena’s repertoire is packed with character, unmistakable vocal delivery and sharp lyricism.

Since igniting his career with a zeitgeist grabbing cover of Kendrick Lamar’s “These Walls,” Kena has received major co-signs from every corner of the industry, from Zane Lowe and Elton John to Kendrick himself. Recently achieving a main playlist addition to Radio 1 for his debut EP lead single “Square One,” Kena has also received major accolades for his cover of Ella Mai’s ‘Boo’d Up’ recorded in session with DJ Target, plus support from Annie Mac and Mistajam. Following the release of his debut EP Found You In 06, Moss Kena has evolved from an online Buzz artist to a contemporary post-pop poster boy amassing streams by their millions. Starting November 15th, Kena joins British vocalist and songwriter Jess Glynne on her UK arena tour – for tickets head to Live Nation.

BUY/STREAM: ONE + ONE EP https://mosskena.lnk.to/OneEP