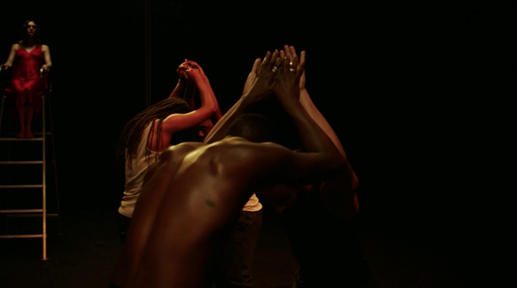 (New York – February 12, 2018) Enigmatic newcomer Moss Kena, who has enjoyed over 8 million streams, including previous tracks and just released “Square One,” today reveals the video for RCA debut single “Square One.” Moss has been met with a groundswell of early support from influencers and media outlets such as Zane Lowe, Beats 1, Complex, High Snobiety, Billboard, Nation of Billions, and more. UK digital culture channel NOWNESS wrote the video features “dance about power and individuality” and describes the clip as “visceral.” The video was directed by and features choreography by iconoclastic creator Holly Blakey. Click HERE to watch “Square One” now.

Director Holly Blakey has made her name for herself, creating visceral, sweaty, emotional, rule-breaking contemporary dance music videos for artists like Florence & the Machine and Coldplay. With the “Square One” video, Blakey responds to the emotional themes of Moss’ single and describes the “ambiguity and the idea that we never find where power truly lies. It moves on and on, nobody knows where it stops or where it began.”

Moss says of the song’s lyrics “’we pay the cost but we don’t know what the price is.’ In all aspects of life, sometimes being back at square one is a blessing in disguise. Re-evaluate and feel the power in moving on.”

Moss was introduced to the world with the huge buzz around a funk-gospel reimagining of Kendrick Lamar’s “These Walls” which was played by Annie Mac at Radio 1, Zane Lowe & Ebro Darden at Apple Music & Mistajam on 1Xtra. Moss’ just released single “Square One” was Zane Lowe’s World Record and went on to receive support from Annie Mac and Toddla T at Radio 1 and Mistajam, Target, Ace and Twin B at 1Xtra with Moss tipped for huge things in 2018.

Blakey’s powerful video is a stunning companion to Moss’ “Square One.”

Get excited world, you’re getting closer to discovering Moss.