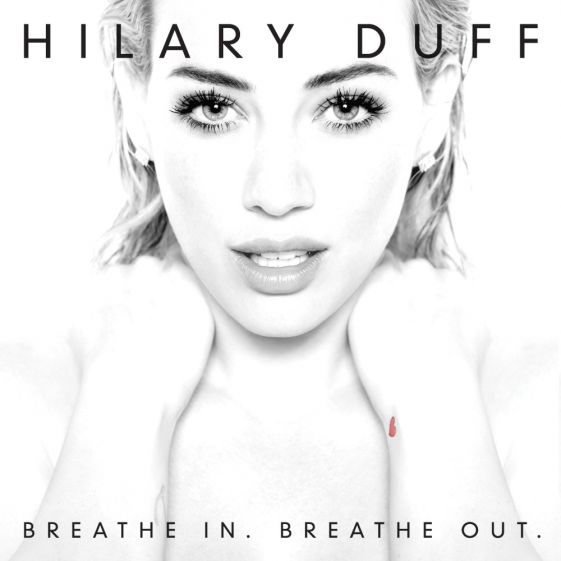 Multi-platinum selling artist and musician Hilary Duff is set to make her highly-anticipated return to music with Breathe In. Breathe Out., her fifth studio album which will be released on June 16 via RCA Records. Hilary’s newest effort will be her RCA Records debut and her first original material since 2007 – all hot on the heels of massive year for Hilary that included her return to television on TV Land’s Younger, which was recently picked up for a second season.

Breathe In. Breathe Out. includes collaborations from groundbreaking songwriters and producers such as Tove Lo, Ed Sheeran, Matthew Koma and Bloodshy.

Hilary simultaneously premiered the music video for the fan-favorite single “Sparks” today on VEVO: http://smarturl.it/SparksVideo. Her momentum will continue with a television takeover during release week that will include appearances and performances on ABC’s biggest shows including Good Morning America, LIVE! with Kelly and Michael and The View.

“Sparks” will make its national television debut when Hilary performs the track live for the first time on The Ellen DeGeneres Show today. Written by Tove Lo, Bloodshy, and Peter Thomas, “Sparks” has solidified Hilary’s return to the music scene. The song has already garnered critical acclaim – both Refinery 29 and Nylon have proclaimed it the summer song of 2015 – and propelled Hilary to new peaks on Billboard’s Social 50 Chart.

Hilary Duff has a global prolific and successful singing career, entering the Top-40 music charts with the singles “So Yesterday” and “Come Clean.” Her first album “Metamorphosis,” reached #1 on the Billboard 200, selling four million copies. Overall, Hilary has sold more than 15 million records worldwide. She has won two platinum awards and her concerts are routinely sold out across the country as she attracts a large and loyal fan base. Among her many accolades, Duff was honored with two separate Teen Choice Awards and was also named by Teen People as one of the magazine’s “25 Hottest Stars Under 25.” Hilary is passionate about several charitable causes, especially those involving children and animals. Her charity work includes the founding of Blessings in a Back Pack which helps inner city schoolchildren get the nutrition they need. She’s also involved with Make-A-Wish Foundation. Hilary gained fame in the Disney Channel’s top-rated series “Lizzie McGuire” in 2001. Shortly after, Duff starred in numerous feature films including “The Lizzie McGuire Movie,'” “Agent Cody Banks,” “A Cinderella Story,” “Cheaper by the Dozen,” and more serious roles such as, co-starring in John Cusack’s critically acclaimed 2008 film “War, Inc.” and “According to Greta,” in which Hilary plays the title character and co-stars with Oscar winner Ellyn Burstyn. Hilary is currently gracing the silver screen once again in her role as twenty-something Kelsey in TV Land’s newest original series “Younger,” starring alongside Tony Award winner Sutton Foster, Debi Mazar and Miriam Shor. The series is written, executive produced and directed by Darren Star of “Sex and the City” and is based on the novel of the same name by Pamela Redmond Satran. Her highly-anticipated fifth album Breathe In. Breathe Out. will be released June 16 on RCA Records.