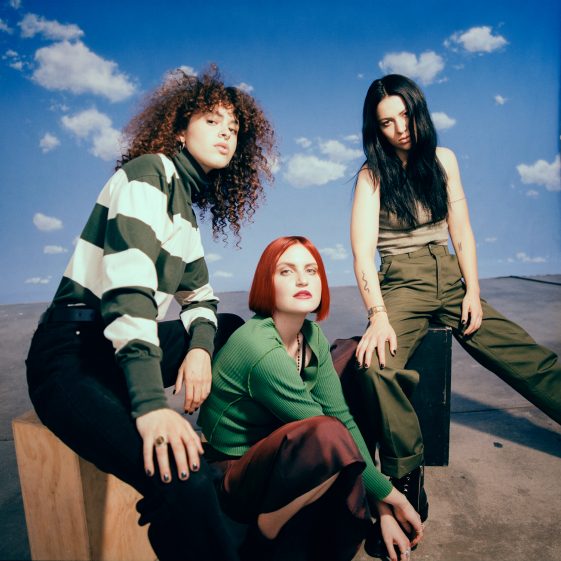 MUNA’S SOPHOMORE ALBUM SAVES THE WORLD IS OUT NOW

TICKETS FOR MUNA “SAVES THE WORLD” TOUR ON SALE NOW

(Los Angeles, CA – September 6th, 2019) – Today, critically acclaimed Los Angeles-based trio MUNA releases their sophomore album Saves The World via RCA Records. Forbes called the album “Superb”. Yesterday in celebration of the album launch they dropped their track “Taken” along with a new video – Watch HERE. “Number One Fan”, the first single off Saves The World was met by mass critical acclaim with PAPER calling it “irresistible” and Vulture declaring that 2019 is about to be theirs. Billboard also called their music “fist-pumping and arena-ready.”

MUNA says “Saves The World is about wanting to grow up. Releasing and touring around About U saw some of our wildest dreams come true, but here’s the side of the story that you don’t hear too often: About U is about our real lives, and in our real lives there were some pretty damaging patterns going on that we couldn’t get release from, and we hit a breaking point. We knew deep down that making the best second record we were capable of making would require us to try to live differently, to create changes in our own lives that would then birth the music.

The writing and recording and living that went into this album occurred over the two most trying, transformative, thrilling, difficult, and ultimately important years in all of our lives. It was the hardest experience we have had thus far as a band and as friends. There were points where we all wanted to quit on ourselves and on each other. The knife’s edge of wanting to quit forced us all to transform. We each had to give up a part of our egos. We had to surrender ourselves to the creative process and to the songs themselves.

This album runs the gamut of emotions and subject matter but the through line is perhaps that we’re trying very earnestly and honestly to tell the truth and not stand in our own way. Faith is the foundation of MUNA. Faith is what held us together when we had to experience the crumbling of our egos – faith in one another when we didn’t have faith in ourselves, and faith in the greater meaning of MUNA.

The title of this record came from a willingness to step into the role as our own saviors, and possibly as mediums through which an important message might pass. MUNA is not us as individuals. It’s an idea. It’s what you all have made it by so lovingly holding our songs in your hearts. These songs are not idle or easy listening. We’ve designed them to be tools and we hope they help you just as much as they’ve helped us.”

Later this month, the band will be hitting the road on their North American headlining tour, MUNA “Saves The World” after a stop in London. Both LA and NY dates have sold out. US tickets are on sale now and December UK tour dates are on sale Friday, September 13 at 4am ET / 9am BST. All tickets can be purchased HERE.

All Tour Dates Below: