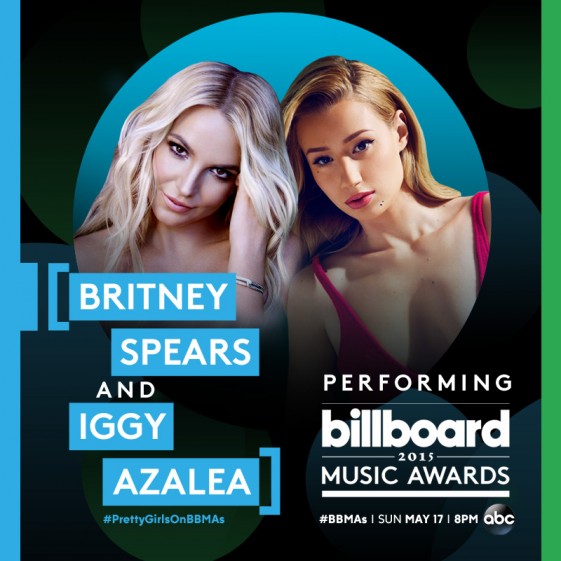 Fun performer facts include:
– Six-time Billboard Music Award winner Britney Spears has charted six No. 1 albums on the Billboard 200 and five No. 1 songs on the Billboard Hot 100. Among her hit singles are the No. 1 smashes “…Baby One More Time,” “Womanizer,” “3” and “Hold It Against Me.” She has sold 33.1 million albums in the United States, according to Nielsen Music.
– In the past year, Iggy Azalea became the first act since The Beatles to chart at Nos. 1 and 2 simultaneously on the Billboard Hot 100 chart with their first two hits. Those songs — “Fancy,” and Ariana Grande’s “Problem,” featuring Azalea — were the first of six top 40 hits for the rapper, who later scored with tracks like “Black Widow” and “Beg for It.” When Azalea’s debut album The New Classic debuted on the Billboard 200 chart, it was the highest-charting rap album by a woman in nearly three years. This year, Iggy is a finalist in 11 categories with 12 entries, competing against herself for Top Rap Song for her hits “Fancy” featuring Charli XCX and “Black Widow” featuring Rita Ora.

ABOUT “2015 BILLBOARD MUSIC AWARDS”
The “2015 Billboard Music Awards” are set to return to ABC and will be broadcast live from the MGM Grand Garden Arena in Las Vegas on Sunday, May 17 at 8:00pm ET/PT. The show will showcase this year’s hottest and biggest music stars. Billboard Music Awards finalists are based on key fan interactions with music, including album and digital songs sales, radio airplay, streaming, touring and social interactions on Facebook, Twitter, Instagram, YouTube, Spotify and other popular online destinations for music. These measurements are tracked year-round by Billboard and its data partners, including Nielsen Music and Next Big Sound. The awards are based on the reporting period of March 10, 2014 through March 8, 2015. The “2015 Billboard Music Awards” is produced by dick clark productions. Allen Shapiro, Mike Mahan, Mark Bracco, Barry Adelman and Robert Deaton are Executive Producers.

Multi-platinum, Grammy Award-winning pop icon Britney Spears is one of the most successful and celebrated entertainers in pop history, and makes her triumphant return to national television with this special performance. In a little more than a decade, Spears sold nearly 100 million records worldwide, making her the fourth best-selling female artist ever in America. Born in Mississippi and raised in Louisiana, Spears became a household name as a teenager when she released her first single “…Baby One More Time,” an international hit that broke sales records with more than 27 million copies sold worldwide and is currently 14x Platinum in the U.S. Her musical career boasts nearly 100 million albums sold worldwide and countless awards and accolades, including the 2011 MTV Video Vanguard Award and Billboard’s Best-Selling Female Artist of the Decade (1998-2008). So far, Spears has earned a total of five No.1 debut albums and 24 Top 40 songs in her career. Spears has been nominated for eight Grammy Awards and won for Best Dance Recording in 2005. Her cutting-edge pop concert Las Vegas residency, “Britney: Piece of Me,” at Planet Hollywood Resort & Casino has been voted “Best Show in Las Vegas” and “Best Bachelorette Show in Las Vegas.” Spears also has been creating fragrances for over ten years, and recently added two new fragrances giving her a total of 15 fragrances available in 87 countries around the world. She launched her sleepwear line, The Intimate Britney Spears Collection http://www.intimatebritneyspears.us/

After years of honing her signature style on hip-hop’s underground circuit, Iggy Azalea burst onto the charts with her critically acclaimed debut album, The New Classic, and emerged as the breakout story of 2014, with one of the year’s most-streamed albums globally. Iggy is the first international female rapper to reach number one on both the Billboard R&B/Hip-Hop and Rap Album Charts, and was nominated for four prestigious 2015 Grammy Awards, including Best New Artist, Best Rap Album, Record of the Year and Best Pop Duo/Group Performance for “Fancy” featuring Charlie XCX. “Fancy” broke airplay records and made history as the longest-leading #1 by a female rapper, also making Iggy the first artist since The Beatles to rank at #1 and #2 simultaneously with their first two Hot 100 hits. “Fancy” stormed the charts this year sitting at #1 for seven consecutive weeks, is currently certified 4x times platinum, was named Billboard’s 2014 Song of the Summer, iTunes Best Song of 2014, the year’s most-streamed song on Spotify, and the most-watched music video on VEVO. Iggy was also featured on Ariana Grande’s certified 4x platinum Billboard Top 40 #1 smash, “Problem,” which won “Best Pop Video” at the 2014 MTV VMAs. Iggy’s single, “Black Widow,” featuring Rita Ora, has already gone double platinum and reached #1 on Billboard’s Top 40 Airplay Chart. Iggy has been nominated for six American Music Awards and won both 2014’s favorite Rap/Hip-Hop artist and favorite Rap/Hip-Hop Album, nine MTV Video Music Awards, was Billboard’s Women in Music 2014 Chart Topper, and countless other awards and accolades. She has performed on the biggest stages on TV, including Saturday Night Live, The Today Show, Good Morning America, The Tonight Show Starring Jimmy Fallon, Ellen and more.

Billboard Music Awards finalists are based on key fan interactions with music, including album and digital songs sales, radio airplay, streaming, touring and social interactions on Facebook, Twitter, Instagram, YouTube, Spotify and other popular online destinations for music. These measurements are tracked year-round by Billboard and its data partners, including Nielsen Music and Next Big Sound. The awards are based on the reporting period of March 10, 2014 through March 8, 2015. Since 1940, the Billboard charts have been the go-to guide for ranking the popularity of songs and albums, and are the ultimate measure of a musician’s success.