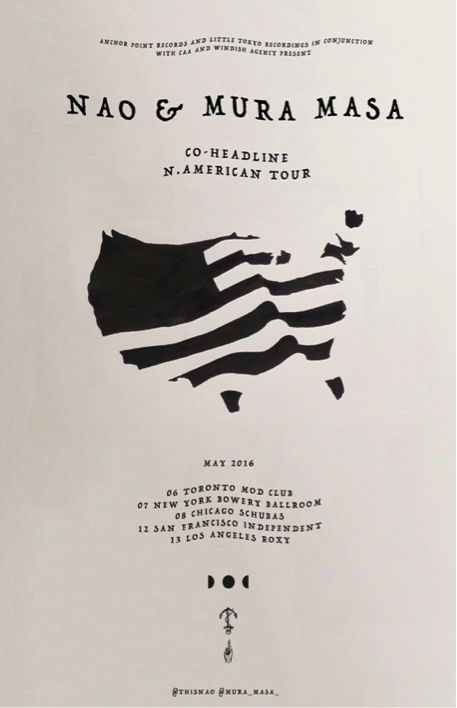 Declared as “One To Watch in 2016” by The Guardian and UK divisions of iTunes, Spotify and Deezer, NAO has been wowing audiences with her “wonky funk” at numerous shows in London, including back-to-back gigs at the Village Underground with tickets selling out four months in advance.

“Bad Blood,” the first single from NAO’s forthcoming debut album, has been streamed over 3 million times on Spotify UK and over 1 million times on Spotify US. It was also #1 on the iTunes UK Electronic chart. SPIN describes the track as “… a spectacular little slice of bliss, Nao’s malleable voice stretching and pulling itself to pieces as a sultry, synthesized melody envelopes her whole,” while The Fader proclaims “Bad Blood” “a cadence idiosyncratic enough to turn the word “koo-koo” into a chills-inducing mini vocal run. And she makes it sound effortless.”

NAO has worked with the likes of A.K. Paul and Disclosure, on whose latest album, Caracal, she adds her distinctive vocals to “Superego.” She went on to open for Disclosure at the Apple Music Festival at the Roundhouse in London in September 2015.

Since the release of her two EPs, 2014’s So Good and 2015’s February 15, NAO has earned quite the following while garnering critical praise in both the UK and US. The Guardian proclaims that she’s “The Future Sound of R&B,” while Pitchfork declares her “a spectacular talent.”

This year looks even brighter for the emerging R&B sensation. NAO placed 3rd on the BBC’s Sound of 2016 list, Spotify UK selected her as a Spotlight Artist for 2016 and Google Play Music featured her on their Ones to Watch For 2016 Top 10 list. In the US, Idolator also named her an artist “On The Verge” to watch in 2016.