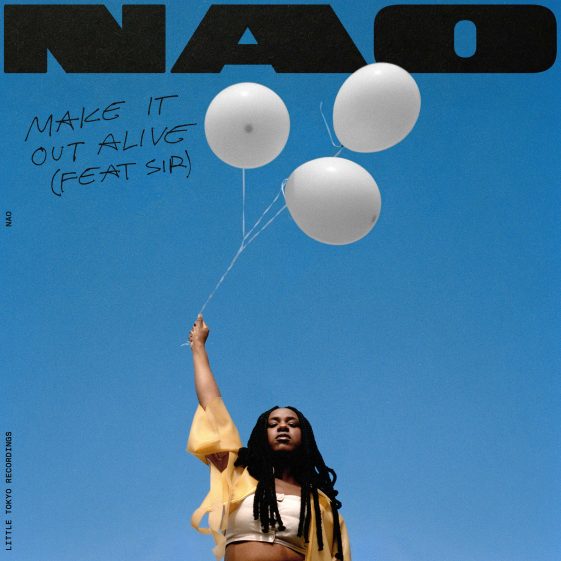 [Los Angeles, CA – August 28, 2017] Nao releases the exhilarating new single ‘Make It Out Alive” ft. SiR. Listen HERE. Lifted from her highly anticipated sophomore album due later this year, Nao brings her unmatchable vocal range to the song, proving her effortless ability of conveying emotions through music and lyricism. She is joined by recording artist and TDE signee SiR, whose distinctive soulfulness flows harmoniously with hers, creating a truly unforgettable collaboration.

“Make It Out Alive really sums up what my album is about. I’d hit my late twenties and everything was in flux; relationships, work life, home situation, everything. I was lost and I genuinely had to ask ‘how do you make it out of here?’. The idea of making it a duet was to reflect how many people, all over the world, are going through the same experience. I’d been a huge fan of SiR’s voice and songwriting for a while so I was over the moon when he agreed to join me on the track.” Nao

‘Make It Out Alive’ follows Nao’s recent ground-breaking single ‘Another Lifetime’ which marked her musical return, two years after the release of her debut album ‘For All We Know’. Nao’s distinctive vocals sail smoothly amongst the waves of soulfulness mixed with her signature, indomitable energy. She explores sounds and travels between genres, further cementing herself as one of the UK’s most original talents. ‘Another Lifetime’ was accompanied by a sensational visual directed by duo Zhang + Knight. Watch HERE. Along with ‘Make It Out Alive’, the tracks serve as the first tasters for Nao’s upcoming sophomore release later this year.

About Nao
Born Neo Jessica Joshua, as a child Nao moved with her family from Nottingham to south Woodford, which borders London and Essex. Living on the cusp of the capital meant she had all the possibilities of it at her reach.

Learning piano as a youngster gave Nao a head-start. Ditching legal studies, she enrolled at Guildhall School of Music and Drama, a prestigious college known for harnessing the talents of young music prodigies (everyone from The Beatles’ producer George Martin to BAFTA winner Mica Levi are Guildhall alumnis). Nao supported her time at Guildhall as a backing singer for the likes of Kwabs & Jarvis Cocker, and was part of an experimental a-capella group The Boxettes.

One show at south London’s Corsica Studios changed her life forever. She was booked  to play with an electronic producer called Loxe and a music manager called her after it. “Sam (who phoned her) was like, ‘Who are you?!’ We just had the most amazing conversation about what was happening at the time, discussing people like SBTRKT and Sampha. I was like, ‘I would love to make my own music and put it out, that would be a dream’. He said, ‘Shall we just do it?’”

This led to the release of her first project So Good, which comprised four experimental and challenging pop heaters, its title track a collaboration with A. K. Paul — brother of genre-hopping enigma, Jai. Come 2015, Nao was playing to a packed-out crowd at Glastonbury and had landed a MOBO nomination for Best Newcomer. “I never thought I would ever get big,” reflects Nao, who was invited to sing on Disclosure’s chart-topping album, 2015’s Caracal. “I dreamt of a record deal — I assumed it would probably be independent and something quite small, though.”

Two years later, Nao released For All We Know via Little Tokyo, but now licensed to Sony subsidiary RCA, co-penning songs with the likes of JUNGLE, and reuniting with A. K. Across a sprawling 18 tracks, the album is a triumph of future-pop possibility, honoured by a Brit nomination for Best British Female Solo Artist later that year.

With the release of ‘Another Lifetime’, ‘Make It Out Alive’ as well as featuring on Mura Masa’s fiery track ‘Complicated’, Nao is making this year her own, gearing up to the release of her highly-anticipated sophomore project.