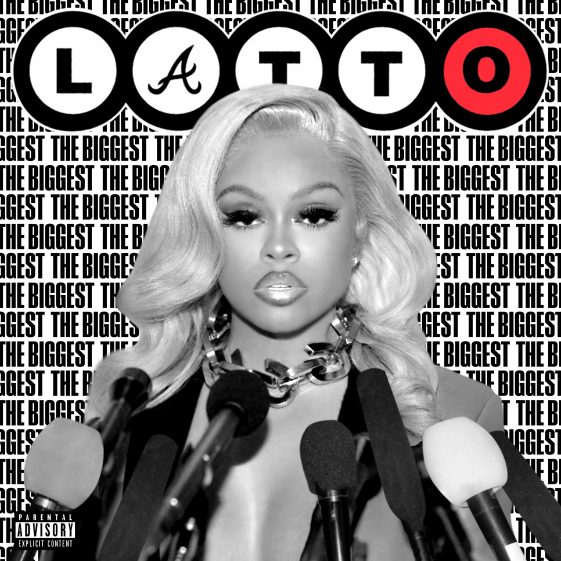 [New York, NY – May 21, 2021] Today, Atlanta-based rapper Latto (formerly Mulatto) shares new single and video “The Biggest,” the first official release under her new moniker and of 2021 via RCA Records. The highly anticipated Supah Mario & Akachi-produced release explains the 22-year-old rapper’s reasoning for the stage name change, her intentions and moving forward with this new phase of her career.

The John Tashiro-directed (Megan Thee Stallion, SAINT JHN, Future) video shows snippets of her personal life and professional milestones from over the years. To further expand on the decision to change her stage name and her explanation for it, Latto sat down for an exclusive interview with Billboard – click here to read / watch.

Latto on her name change (from Billboard interview): “I feel like it’s a new chapter, and I don’t want any more of that negative energy. Latto is like ‘Lotto,’ but my little twist on it. This new name is going to bring new opportunities and new positivity and good fortune. That’s actually what Latto is to me.”

With the start of these changes in this new chapter of her career, it’s clear that Latto is still that bitch. Her hit track “Bitch From Da Souf (Remix)” featuring Saweetie & Trina is now RIAA-certified Platinum and her track “Muwop” featuring Gucci Mane is RIAA-certified Gold, making Latto the first ever female solo rapper from Atlanta to go RIAA-certified Gold or Platinum. Her 2020 major label debut album Queen of Da Souf, along with the extended version, has garnered over 364 million streams worldwide and her videos continue to rack up views –  “Bitch From Da Souf (Remix)” featuring Saweetie & Trina has nearly 70 million views and “Muwop” featuring Gucci Mane has over 57 million views. Throughout the past year and a half, Latto’s been praised, featured and interviewed by various press outlets including NPR, Billboard, FADER, XXL, Complex, Vogue, ELLE, Interview Magazine, T: New York Times Style Magazine, Cosmopolitan, Allure, GQ, PAPER, ESSENCE, Pitchfork, Noisey, UPROXX, The Source, Hot New Hip Hop and more.

Keep Up With Latto:

Raised in Atlanta, GA, 22-year-old rising rapper Latto has been making a name for herself since she was 10 years old. The Rap Game Season One winner has continually released music since 2016 and signed with RCA Records in 2020. In June 2019, Latto released her EP Big Latto, which included her breakout-hit song “Bitch From Da Souf.” The December 2019 release of her follow-up project, Hit The Latto, contained the remix version of the track featuring Saweetie & Trina, the accompanying video has been viewed nearly 70 million times. Prior to the aforementioned, her impressive catalog of music includes Miss Mulatto (2016), Latto Let ‘Em Know (2017) and Mulatto (2018).

As part of the elite new wave of female rappers, such as Flo Milli, City Girls, Saweetie and more, Latto has proven that her pen game, replete with witty and raw verses, is unmatched. Her track “Bitch From Da Souf (Remix)” featuring Saweetie and Trina went RIAA-certified Platinum, making Latto the first solo female rapper from Atlanta to accomplish this feat. The 22-year-old was also one of only two women inducted into the XXL 2020 Freshman Class, earning her another major milestone in her burgeoning career. In August 2020 Latto released her major label debut project Queen of Da Souf and later that year also released of the extended version of the project. Combined, both versions garnered over 364 million streams worldwide and had multiple standout tracks including “In n Out” feat. City Girls, “Sex Lies” featuring Lil Baby and the now RIAA-certified Gold track “Muwop” feat. Gucci Mane. In addition to her own music, Latto has been inescapable; from her cameo in Cardi B’s iconic “WAP” video featuring Megan Thee Stallion, to countless features including Chris Brown & Young Thug’s “Go Crazy (Remix)” with Future and Lil Durk, Chloe & Halle’s “Do It” (Remix) with Doja Cat and City Girls, NLE Choppa’s “Make Em Say” and Hitmaka’s “Thot Box (Remix),” she’s proven that Big Latto is bigger and better than ever before. This summer Latto will be performing at the Rolling Loud festival in Miami and Lyrical Lemonade’s Summer Smash festival in Chicago.