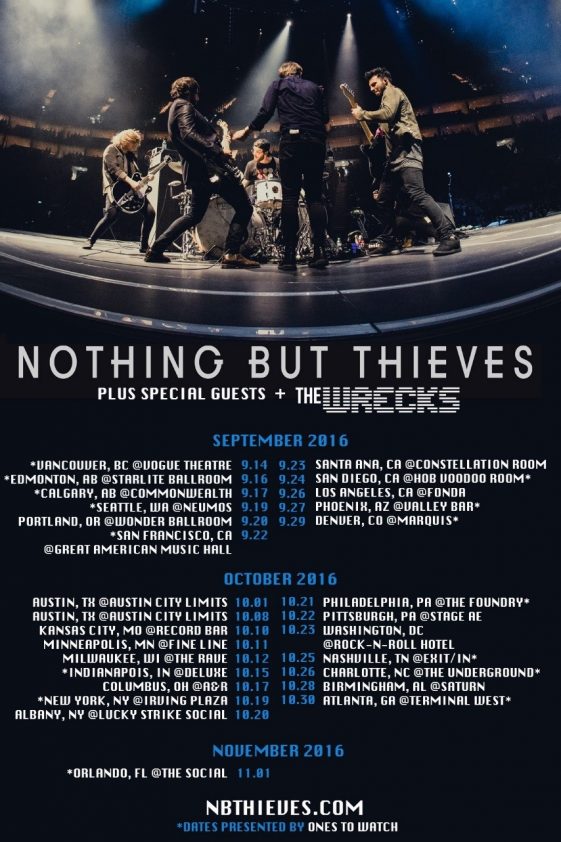 (Los Angeles, CA)—Critically acclaimed U.K. based band, Nothing But Thieves, is hitting the road again on their U.S. headlining tour this fall.  The tour will be making stops in a number of cities across the country including Los Angeles, Philadelphia, and New York City. Also, Nothing But Thieves handpicked the band, The Wrecks, as support on this tour. Tickets will be available for pre-sale today, Monday, June 20th (Click HERE) through the band’s mailing list.  Additionally, Citi card members can purchase tickets for select tour dates tomorrow, Tuesday, June 21st (Click HERE). See full list of tour dates below.

Nothing But Thieves’ self-titled album is out now via RCA Records/Sony Music U.K.  They performed the first single off of their album, “Trip Switch”, on Jimmy Kimmel Live! for their U.S. television debut, and it also hit No. 1 at Alternative Radio. Their latest single, “Wake Up Call” (Click HERE to watch music video), was the #1 Most Added at Alternative Radio, and the band performed the hit song on Conan.  Click HERE to watch.  With the release of their album, upcoming tour, and a number of summer festival performances including BottleRock, Lollapalooza, Austin City Limits, Voodoo Festival, and Life Is Beautiful, Nothing But Thieves is looking forward to an unstoppable future.

* = Live Nation’s Ones To Watch Presents: Nothing But Thieves (Presented by Citi)