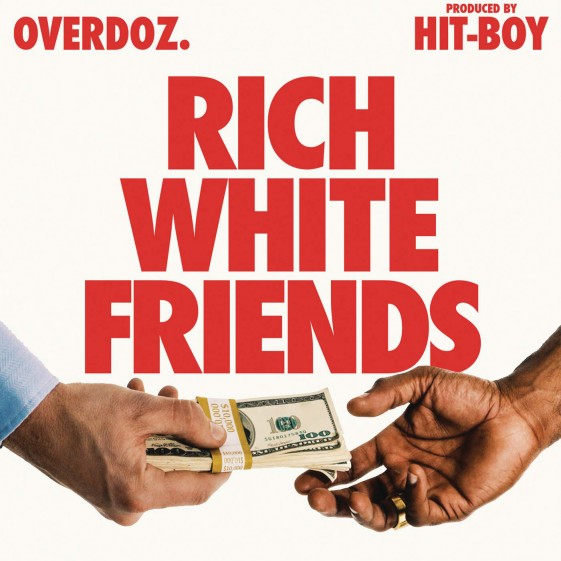 Los Angeles based hip-hop collective, OverDoz. are back with their new song and video entitled “Rich White Friends.” The track is produced by Grammy-Award winning producer, Hit-Boy and features lyrical content that is topical, honest and hilarious.

“Rich White Friends” derived from a real life situation that OverDoz. experienced in the spring of 2014. The group describes the situation as such, “Overall, the concept for the song came from an experience during last year’s Coachella Music Festival. We were invited to the festival by some of our white homies. During the weekend, we stayed at their mansion and just witnessed all the crazy shit they were doing. At one point, we even heard one of them yell out ‘n*gga’ when a Kendrick Lamar song came on. Ultimately, ‘Rich White Friends’ is just our view of what’s going on in the world today, everyone’s story is different, this is ours.”

To fully bring the song to life, OverDoz. selected music video director Calmatic, who has directed videos for artists such as Kendrick Lamar, Jhene Aiko and Vic Mensa. OverDoz. and Calmatic collaborated to create a visual, the director describes as, “Fun, but there is still a message within it. A lot of people are making songs and visuals about today’s world problems, but they are all dark and very serious. OverDoz. is a fun and vibrant group so I just wanted to touch on topics we all relate to, but capture the colorful, unique vibe that OverDoz. is known for. Ultimately, sometimes we have to laugh to keep from crying. ”

The visual for “Rich White Friends” already has the media world buzzing with Complex calling the video, “…one of the best visuals of the year.” XXL Magazine also praised the cinematic visual, referring to it as “…a clever look at current race relations in the United States and how the power of words and image can change the entire perception of a situation.”

“Rich White Friends” will be featured on OverDoz.’s debut album 2008, which will be released later this year via Polo Grounds Music and RCA Records. 2008 will also feature production from musical genius, Pharrell Williams, who compared the group to hip-hop legends, Outkast.

The group, which consists of Kent, Cream, P and Joon became close childhood friends at the age of six, officially forming OverDoz. in 2008. The crew has released four well-received mixtapes including 2013’s Boom. In addition, OverDoz. has performed at both the SXSW Festival and the Lollapalooza Music Festival as well as opened up for such artists as Erykah Badu, Childish Gambino and A$AP Ferg among others. With their buzz continuing to grow, 2015 will surely prove why OverDoz. is essential to hip-hop and the music industry as a whole.