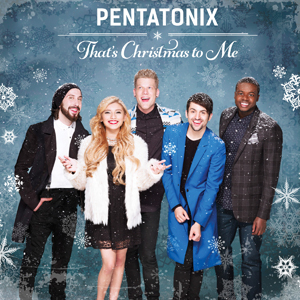 Holiday Performances on The Today Show, Macy’s Thanksgiving Parade, A Hollywood Christmas at The Grove, Christmas in Rockefeller Center and The Sing-Off Holiday Special

“Silent Night” Featured As iTunes Single Of The Week

November 26, 2014 – Vocal sensations Pentatonix soar into the holiday weekend with That’s Christmas To Me jumping to #3 on Billboard’s Top 200 Album Chart, while holding the #1 spot on the Holiday Album Chart for the 5th consecutive week selling over 99,000 units this week with total sales of nearly 200,000 in the US to date. That’s Christmas To Me is currently #1 on Amazon’s CD and Digital Best Sellers list as well as Top 3 on iTunes Main Albums Chart.

In addition, their PTXMAS (2013) jumps back onto Billboard’s Holiday Chart at #4 causing for 2 albums in the Top 5 on the chart. PTXMAS also lands in the Top 5 on Amazon’s CD & Digital Best Sellers List and Top 15 on iTunes Main Albums Chart. On Spotify, the album has been streamed over 3 million times in the US.

Yesterday, PTX premiered the music video for “Silent Night”, the 5th music video in support of That’s Christmas To Me. Earlier this month, the band released, “White Winter Hymnal,” “Winter Wonderland / Don’t Worry Be Happy” ft. Tori Kelly, “Mary, Did You Know?” and their original song and title track, “That’s Christmas To Me”. All four videos have been viewed over 20 million times.

“Silent Night” is also featured as iTunes single of the week. This is the first holiday song of the season for single of the week. As PTX readies next week’s 2015 tour announcement, they kicked off their promotional campaign with a presenter slot on the 2014 American Music Awards. The group performed this morning on The Today Show and are set to continue promotion with performances on Macy’s Thanksgiving Day Parade, Christmas In Rockefeller Center, A Hollywood Christmas at the Grove and The Sing Off Holiday Special.
PTX recently collaborated with world-renowned director Baz Luhrmann and Barney’s New York to compose and arrange the music for the Baz Dazzled Holiday Windows on Madison Avenue which can be seen throughout the holiday season. They were also the main talent for the unveiling on November 13th performing their own arrangement of their holiday hits.