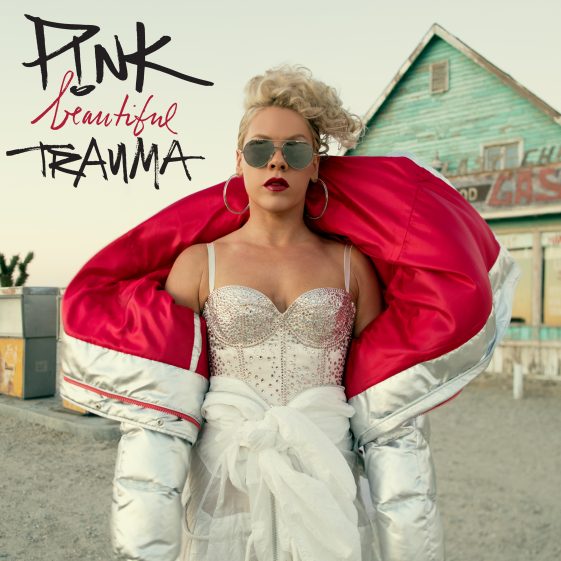 BECOMES THE HIGHEST SELLING DEBUT FOR A FEMALE ARTIST IN 2017

ALBUM DEBUTS #1 IN TEN OTHER COUNTRIES

Overseas, Beautiful Trauma debuts at #1 in 10 additional markets including Australia, United Kingdom, Canada, France, New Zealand, Ireland, Belgium, Switzerland, Austria and the Netherlands and Top 5 in 14 markets.  The album is certified double platinum in Australia, gold in New Zealand and is the biggest international debut of 2017 in the United Kingdom. In Ireland, P!nk is the first and only female to debut at #1 in 2017.

P!NK kicked off promotion with a profile on CBS Sunday Morning followed by an appearance on The Tonight Show Starring Jimmy Fallon. She returned to Saturday Night Live and Good Morning America to perform her hit single, “What About Us” and “Beautiful Trauma.”  She capped off her television appearances on Watch What Happens Live With Andy Cohen.

Following features with The Los Angeles Times, USA Today, Entertainment Weekly, Huffington Post, Vulture and so much more, Beautiful Trauma was received to rave reviews. People Magazine voted the album #1 on their coveted People Picks list while Entertainment Weekly graded the album with an A- and stated, “Pink leaves other pop stars in the dust on Beautiful Trauma.”  Nylon called the album, “one of the best pop albums of the year,” while the Huffington Post claimed it’s “the mega-star’s most seamless, consistently fulfilling body of work.”

The first single, “What About Us” has over has over 150 million streams worldwide and is currently #1 on Billboard’s Dance Club Songs Chart, #2 at Adult Top 40 and according to Billboard is the 8th most played song in the country.

Since her debut in 2000, P!NK has released seven studio albums, 1 greatest hits album, sold over 50 million album equivalents, over 75 million singles, over 2.4 million DVDs worldwide and has had 15 singles in the top 10 on the Billboard Hot 100 chart (four at #1). In addition, she is the recipient of three Grammy Awards, one Daytime Emmy Award, three Billboard Music Awards, six MTV Video Music Awards, two MTV Europe Awards, two People’s Choice Awards and was named Billboard’s Woman of the Year in 2013.  She has sold out arenas all over the world, made her acting debut in Lionsgate’s Thanks for Sharing and released a side project with singer/songwriter Dallas Green entitled You+Me. Last year, P!NK released “Just Like Fire” from Walt Disney Studios’ feature film Alice Through The Looking Glass.  The track was #1 on the Adult Contemporary Chart for 6 consecutive weeks and has over 155 million views of the music video. P!NK was featured on Kenny Chesney’s “Setting The World on Fire,” marking her first #1 on the Country Airplay Chart and Hot Country Songs Chart.  The track also received a 2017 Grammy nomination for Best Country Duo/Group performance earning P!NK her 18th Grammy nomination.

P!NK is a huge supporter of various charities, including: Make a Wish Foundation, Autism Speaks, Human Rights Campaign and No Kid Hungry.  She was formerly a spokesperson for COVERGIRL and remains on the UNICEF team as an Ambassador.