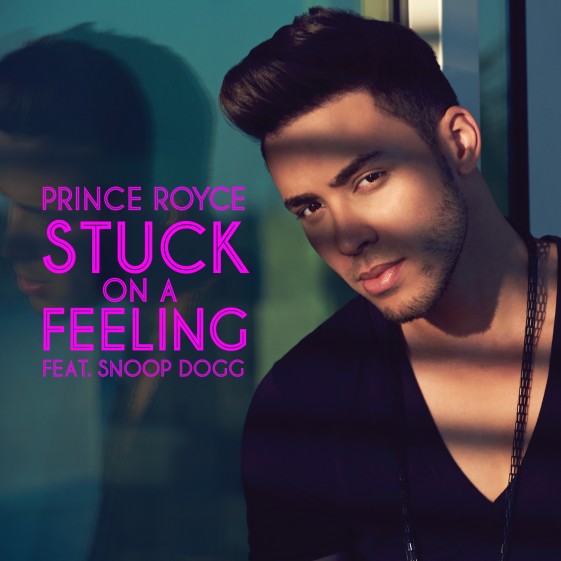 “Stuck on a Feeling” is Prince Royce’s first foray into the mainstream music market. The single was produced by Jason Evigan (Maroon 5, Demi Lovato, Jason Derulo). His first English-language album will be released next year on RCA Records.

The twenty-five year old Bronx-born, Prince Royce has had nine #1 songs on Billboard’s Latin Songs chart and enjoyed numerous weeks at #1 on Billboard’s Latin Albums chart with his first three albums. He has over 600 million streams online and over 28 million Facebook followers. He has sold out the most prestigious venues in Latin America, as well as concerts throughout the US including Radio City Music Hall, The Nokia Theater, and he just headlined a show at Theater at Madison Square Garden on 11/15.

According to Billboard, Prince Royce is “the most successful new Latin acts in recent years.” He has recorded hit songs with other superstars including Selena Gomez, Daddy Yankee, and toured with Enrique Iglesias and Pitbull. He has headlined three 30-city US tours and was the winning coach in the first two seasons of the top-rated US Latin TV show La Voz Kids (“The Voice Kids”).

Prince Royce has won 20 Latin Billboard Awards, 16 Premio Lo Nuestro and 18 Premios Juventud, and is currently nominated for 4 Latin Grammys. At the age of twenty-two, Royce garnered the Composer of the Year Award at the 2012 Latin Billboard Awards, becoming the youngest person in the history of the awards to receive the honor; and at 23 he won the 2013 BMI Latin Songwriter of the Year Award.  In 2013, the artist signed a major recording contract with Sony Music Entertainment for the release of Spanish-language albums through Sony Music Latin as well as English-language albums via RCA Records.