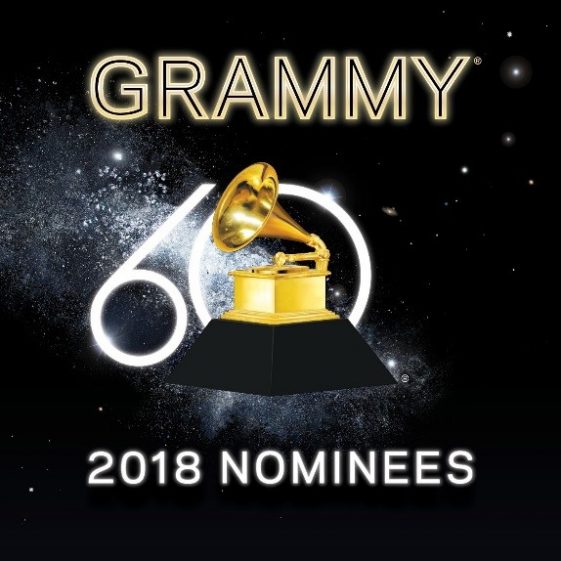 The latest installment of the best-selling series—now in its 24th year—features a collection of the biggest and brightest GRAMMY-nominated music for the upcoming 60th Annual GRAMMY Awards®. A portion of album proceeds benefit the year-round work of the GRAMMY Museum® and MusiCares®—two charitable organizations founded by the Recording Academy that focus on music education programs and critical assistance for music people in need.

Beginning Nov. 24, during “GRAMMYs® Greatest Stories: A 60th Anniversary Special” at 9 p.m. ET/PT on CBS, music fans can log on to 2018grammyalbum.com or cbs.com/grammys to pre-order the album and enter for a chance to win a trip for two to the 60th Annual GRAMMY Awards on Sunday, Jan. 28, 2018, at Madison Square Garden in New York City.

“We are pleased to partner with RCA Records to showcase a unique collection of GRAMMY-nominated tracks on one album,” said Neil Portnow, President/CEO of the Recording Academy. “This is always a rewarding project for the Academy, as we not only offer one lucky winner a chance to attend the 60th GRAMMY Awards in New York City, but we also donate a portion of album sales to music education programs and music people in need through MusiCares and the GRAMMY Museum.”

“We are honored to partner once again with the Recording Academy to release the 2018 GRAMMY Nominees album,” said RCA Chairman and CEO Peter Edge. “This has been an incredible year for music across all genres, and this collection serves as a celebratory sampling of some of the most important songs released this year. In addition, the entire RCA team joins me in expressing our excitement to work with the Recording Academy on releasing this album, particularly because it benefits the crucial work done year-round by MusiCares and the GRAMMY Museum.”

*No purchase necessary to enter or win. Visit 2018grammyalbum.com or cbs.com/grammys for details and eligibility requirements.

ABOUT THE RECORDING ACADEMY

The Recording Academy represents the voices of performers, songwriters, producers, engineers, and all music professionals. Dedicated to ensuring the recording arts remain a thriving part of our shared cultural heritage, the Academy honors music’s history while investing in its future through the GRAMMY Museum, advocates on behalf of music creators, supports music people in times of need through MusiCares, and celebrates artistic excellence through the GRAMMY Awards—music’s only peer-recognized accolade and highest achievement. As the world’s leading society of music professionals, we work year-round to foster a more inspiring world for creators.