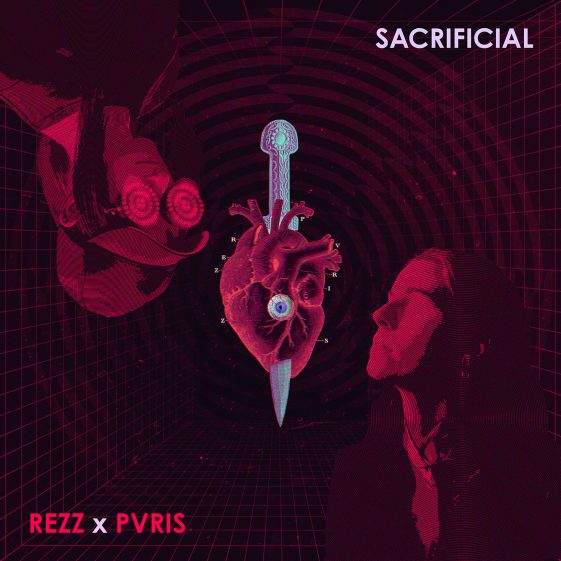 Rezz says, “When PVRIS sent over the vocal I immediately had an idea for the song. I love her music, so I’m really glad we were able to make it happen.”

PVRIS says, “”Sacrificial” is about risking it all for love… even if the world around you is telling you it’s not right.”

25-year-old Canadian DJ/producer Isabelle Rezazadeh AKA Rezz has racked up tens of millions of streams, sold out legendary venues and headlined top festivals around the world. She oozes originality and produces genre-bending electronic works, striking a sharp balance between bass-heavy and minimal tech compositions. Her first independent project – the adventurous Beyond The Senses EP – was released in 2019 and received praise from Alternative Press, SPIN and Billboard who called it “her most impactful project to date.” She graced the cover of Billboard’s 2019 Dance Issue and has been attributed as being at the forefront of the dance and rock music crossover. 2020 marked a banner year for the producer who released her first single through RCA Records “Someone Else” with Grabbitz which has garnered over 36 million streams worldwide and has reached #15 on Alt Radio in the US and #1 in Canada. Alternative Press praised the song upon its release, including it as the lead track in their weekly playlist. They called the video “another high point in Rezz’s canon,” saying, “…the song evokes a sinister groove that will appeal to dance music devotees as well as industrial rivetheads…” Last summer, Rezz received The JUNO Award for Electronic Album of the Year for her work on Beyond The Senses.

PVRIS have officially entered their next chapter with widely-acclaimed new studio album, Use Me, as frontwoman, multi-instrumentalist, songwriter, and producer Lynn Gunn owns her role as PVRIS’ leader and sole architect. Growing up in Lowell, MA, Lynn taught herself drums, guitar, and bass by sneaking into her brother’s bedroom in grade school and playing for hours on end. During computer lab at school, she discovered production and recording software, tuning out the day’s lessons in order to tinker with her very first beats. This process carried over to PVRIS, which she officially formed in 2013. A year later, White Noise inspired a growing fan base and scored a silver certification in the UK. Meanwhile, 2017’s All We Know of Heaven, All We Need of Hell bowed in the Top 5 of the Billboard Top Alternative Albums Chart and ushered their stream tally past 220 million by 2020. Over the next seven years, PVRIS performed everywhere from Coachella, Lollapalooza, and Reading & Leads to Jimmy Kimmel LIVE! in addition to supporting Muse, Fall Out Boy, and 30 Seconds To Mars in arenas and selling out headline dates worldwide. At the same time, Vice, The New York Times, Medium, Rolling Stone, Billboard, Playboy, and more extended praise.