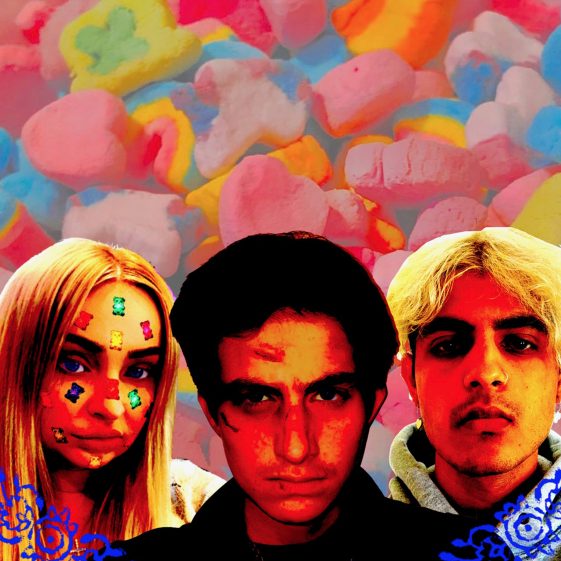 ElyOtto says, “I never thought my own song could sound this good. Kim and Curtis added so much energy to it, it gives me goosebumps every time I listen.”

Kim Petras says, “I heard “SugarCrash!” and, like anyone who’s ever been on TikTok, had it on repeat for a while. When ElyOtto reached out I immediately said yes, wrote the verse, and sent it in. And ElyOtto loved it. I love ElyOtto as an artist and feel really proud to be a part of this.”

Elliott Platt, the 17-year-old singer, songwriter and producer from Calgary, Canada known as ElyOtto, has taken the internet by storm with his insanely catchy earworm of a song “SugarCrash!” which has reached #11 on the TikTok Viral Charts and has garnered over 8M creations. The hyperpop bop has bounced off the platform and is a streaming juggernaut with 100M streams on Spotify to date, peaked at #43 on the Spotify U.S. chart and reached No. 1 on Spotify’s U.S. Viral 50 playlist in February.

ElyOtto, who has been called “the New Face of Hyperpop” by SPIN Magazine, is looking forward to releasing new music under his newly inked deal with RCA Records.

Fast-rising international pop sensation Kim Petras has become one of music’s most buzzed-about artists. Her latest single “Malibu” (PRESS HERE) – a glittering, sun-kissed bop inspired by the silver screen, Baywatch fantasy of Malibu – is quickly adding to her more than 555 million global streams. Kim also recently released a star-studded “Malibu (At Home Edition)” fan video. PRESS HERE to watch the video, which features Kim’s most spirited fans alongside some special celebrity friends including Demi Lovato, Paris Hilton, Jonathan Van Ness, Charli XCX, Jessie J, and many more. Kim’s acclaimed 2019 debut full-length project Clarity dominated Spotify’s “New Music Friday” and Apple Music’s “Best of The Week” playlists for 10 consecutive weeks with its acclaimed singles, including glacial hit “Icy” (PRESS HERE) which landed her on Good Morning America for her national TV debut. Selling her first ticket in 2019, Kim sold out her first-ever headline tour last summer in minutes during presale, and her international The Clarity Tour sold out The Shrine in LA and two back to back nights at Avant Gardner in NYC. Kim’s undeniable voice and imaginative artistry have skyrocketed her to international recognition and earned her major mainstream media acclaim from the likes of NY Times, NPR, Vanity Fair, People, Rolling Stone, MTV, Glamour, Elle, Variety, Harper’s Bazaar, Allure, Billboard, Cosmopolitan, Seventeen, Paper, V Magazine, Noisey, OUT, Pitchfork, i-D, Refinery29, and more. First breaking out with her #1 Spotify Global Viral 50 bop “I Don’t Want It At All,” Kim launched into Top 40 radio with her pop hit “Heart to Break,” opened for Troye Sivan, revived and redefined Halloween music with her spooky project TURN OFF THE LIGHT, collaborated with Charli XCX, Kygo, Cheat Codes, MAX, SOPHIE, Lil Aaron, Riot Games’ K-pop supergroup K/DA and more, appeared on “How It’s Done” from the Ariana-Grande-produced Charlie’s Angels soundtrack, and has been featured on multiple billboards in New York, London, and Los Angeles as a Spotify RISE artist.

21-year-old Curtis Waters was born in Nepal and migrated to Germany, then relocated to Calgary when he was a child. Eventually he and his family settled in North Carolina at age 17, where he currently lives with his parents and younger brother. Growing up, Curtis resorted to finding interests online and focusing on his creative endeavors as an escape from suburban life and his own mental health struggles. His love of writing poetry and doing graphic design as a kid evolved into teaching himself how to make beats and produce music using YouTube tutorials. He first started earning money at 14 by selling his beats to artists he met on Soundcloud, until Curtis eventually realized he should work on his own musical projects. Inspired by Kanye, Tyler, the Creator and Odd Future, Curtis started writing, producing and engineering his own tracks and releasing them online, quickly catapulting himself to this most current and exciting place in his burgeoning musical career. Now, with a critically acclaimed debut album  ‘PITY PARTY’ and millions of global streams under his belt, Curtis is working on new music that he plans to release very soon while continuing his pursuit in shaking the status quo.