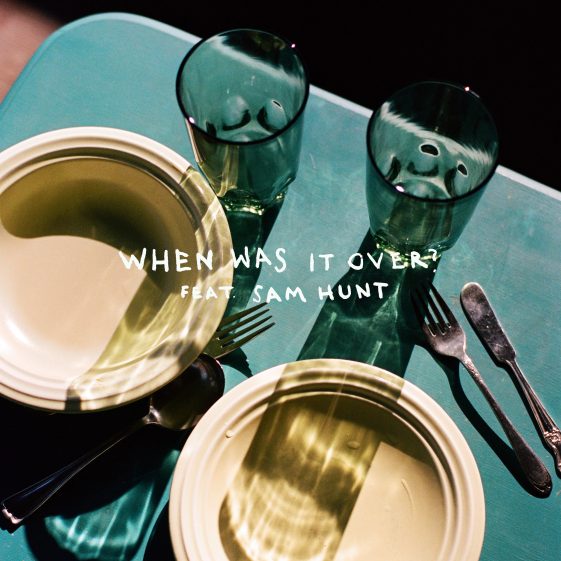 (Nashville, TN – April 23, 2021) – Critically acclaimed singer/songwriter Sasha Alex Sloan returns with her first new release in 2021. “when was it over?” feat. Sam Hunt was written by Sasha, Sam Hunt, King Henry, Shane McAnally, and Emi Dragoi and produced by King Henry and is out now via RCA Records. Listen HERE.

On “when was it over?” Sloan pairs for the first time with the incredible Sam Hunt for a country duet tinged with the beauty and the pain of an ending relationship.

Says Sloan, “when was it over?” is about not being able to let go of someone even when you know there’s nothing left. Shane brought the title into the room and Sam and I both loved it. The rest fell into place from there.”

Always a fan of collaboration as both a performer and a songwriter, this duet follows Sloan’s most recent partnering with Charlie Puth on a new version of her acclaimed track “Is It Just Me?” The original version of “Is It Just Me?” was featured on The New York Times Playlist column and is just one of the many critically heralded tracks on Sloan’s debut album Only Child. Idolator gave the album a 5/5 rating saying the 10-song set is “extraordinary,”  LADYGUNN declared Sasha “the real deal” and American Songwriter called her a “…prolific pop writer…” Sasha performed “Lie” on NBC’s The Tonight Show Starring Jimmy Fallon on September 24th.

After emerging late 2017 and appearing on a handful of high-profile collaborations, 26-year-old singer/songwriter Sasha Alex Sloan released her debut single “Ready Yet.” Since then, she has established herself as a true wordsmith, an artist’s artist, who crafts potent melodies filled with poignant lyrics. As a songwriter Sasha has amassed over 3.6 billion streams by penning hits for some of today’s biggest artists. In 2018 Sasha released her first two EPs, Sad Girl and Loser. Her track “Normal” was heralded by Billboard as a “catchy introvert anthem.”  These emotionally-rich, left-of-center pop releases lead to her late night debut on The Late Show with Stephen Colbert in 2019 with a performance of “Older.” That year, Sasha completed her first North American and European headline tours (sold out) and released her 3rd and final EP Self Portrait, which had her single “Dancing With Your Ghost” as Idolator’s 6th “75 Best Pop Songs Of 2019.” She also recently scored a #1 on the Dance Chart for “I’ll Wait,” her collaboration with Kygo. Sloan’s critically acclaimed debut album Only Child was released in late 2020 and is available now.

Multi-Platinum-selling, award-winning hitmaker Sam Hunt’s sophomore album SOUTHSIDE debuted to critical acclaim and was one of the top country albums of 2020 landing at No. 1 on the Billboard Country Albums chart. Named one of the Best Albums of the Year by The New York Times and US Weekly, the Platinum-selling project features 12 songs all written by Hunt including his No. 1 hit “Kinfolks,” one of NPR’s Best Songs of 2020 “Hard To Forget,” his current single “Breaking Up Was Easy in the 90’s,” and his three-week No. 1, 6x Platinum-selling, GRAMMY-nominated smash, “Body Like A Back Road.”

SOUTHSIDE follows Hunt’s GRAMMY-nominated, Triple-Platinum-selling debut album, MONTEVALLO, which also topped the Billboard Country Albums chart and produced four No. 1 singles and five Platinum and Multi-Platinum-selling hits including “Leave the Night On,” “House Party,” “Take Your Time,” “Break Up In A Small Town” and “Make You Miss Me.”

To Buy/Stream “when was it over?” feat. Sam Hunt:

To Buy/Stream Only Child: