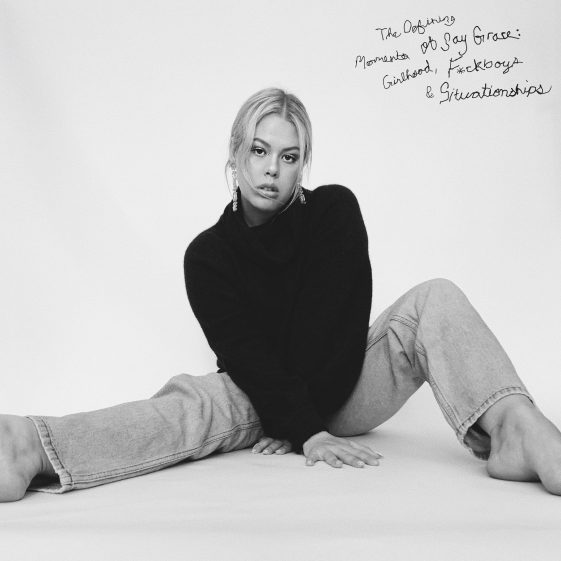 LISTEN to the EP: https://smarturl.it/DefiningMomentsSG

[New York, NY – February 7, 2020] Cuffing season is over and if it didn’t work out, you can check the street corner for your stuff. SAYGRACE is cold as ice (because she has to be) in “Gone,” the latest track + video from her debut EP, The Defining Moments of SayGrace: Girlhood, Fuckboys & Situationships. Both the video for “Gone” and EP are out today via RCA Records.  Watch the video HERE. Listen to the EP HERE.

Fuckboys and situationships are the inspo on “Gone,” a track blasting a good-for-nothing guy who’d rather act like a dog than a boyfriend. You reap what you sow, especially when you’re dating a woman who knows her worth.

The “Gone” video out today completes the trilogy that began with EP single “Boys Ain’t Shit” followed by “Doin Too Much,” all representing the viewpoint of SAYGRACE’s younger self.

Pulling from her life, Brisbane, Australia born singer/songwriter SAYGRACE has made the conscious decision to put the version of herself she wants to be into the world on her debut EP, The Defining Moments of SayGrace: Girlhood, Fuckboys & Situationships. SAYGRACE set out to make music that tells girls they don’t have to have it all figured out or succumb to pressure to be something they’re not. That it’s okay to just be yourself. And that it’s okay if you don’t know who that is yet.

“The things that I’ve gone through have made me a little rough around the edges and hard for some people to take, but it’s who I am. I’d rather be this way than be a version of myself that makes you feel more comfortable,” she says. SAYGRACE thinks of her lyrics as a message to the younger version of herself, and a message to any woman who needs to hear it; that in a world that’s always trying to shrink you, you can be as big as you want.

Her debut track, “Boys Ain’t Shit,” finds SAYGRACE flipping the script on a man who pushed her to the breaking point — but instead of vectoring in on the problems in their situationship, SAYGRACE turned the track into an anthem for all women who feel like swiping, doing emotional labor, and the interchangeable nature of modern dating is dehumanizing.

“Being in my early 20s, people don’t want to treat a relationship with respect. I’ll give all of myself and then when I find out that I’m not being met with the same respect back, I’m like, what? It just doesn’t make sense to me because that’s not how I move,” SAYGRACE explains.

She followed it with “Doin’ Too Much,” a song for people who keep it 💯. Then came “Loyal,” and “Priorities,” two tracks examining the choices women have to make, both in love and in work, to get what they want and stay authentic.

“As woman we’re told all your value is placed on how fuckable you are, but I refuse to accept that as reality,” she says. “What I realized as I got older is that nothing is more powerful than divine feminine energy and when woman come together and support each other the possibilities are infinite.”

SAYGRACE is all about finding her place and her power as a young woman despite sometimes still feeling like a lost kid in this big world.

SAYGRACE discussed the inspiration behind her debut EP with Billboard Magazine. Read it HERE.

Watch the Video for “Gone”: