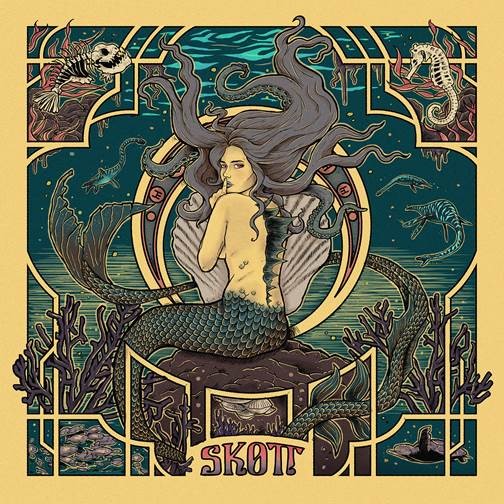 CONFIRMED TO APPEAR AT WAYHOME, LOLLAPALOOZA AND OSHEAGA FESTIVALS NEXT MONTH

“Mermaid” is the follow up to Skott’s last single, “Glitter & Gloss,” which was hailed as “ethereal and evocative” (Idolator), and “her punchiest pop moment to date” (DIY). The official video was directed by Zhang + Knight, beautifully shot over two days in Ukraine. Watch the stunning visual HERE. This past spring, she unveiled a sparkling acoustic version of the song, which you can listen to HERE. As her first release of 2017, “Glitter & Gloss” follows previous singles, “Lack of Emotion,” “Amelia,” “Wolf” and her stunning debut single from last summer, “Porcelain,” which snagged a coveted slot on the official FIFA 17 soundtrack.

After dazzling crowds at SXSW in March, and with sold-out shows in both LA and New York already under her belt, the enchanting singer-songwriter Skott is returning to North America this summer with three prestigious festival appearances at Wayhome in Ontario (tickets), Lollapalooza in Chicago (tickets) and Osheaga in Montreal (tickets). In addition to these festival dates, the captivating singer/songwriter will be supporting Phantogram for two special shows in Buffalo, NY and Millvale, PA. Skott will also be headlining Chicago’s Schubas Tavern on August 3rd. For a full list live dates and further information, please visit www.facebook.com/skottmusic

Across the Atlantic, Skott has been busy working on new material set for release throughout the year, along with a highly anticipated full-length album, expected in 2018. In-between writing and studio sessions, the Scandinavian songstress has been busy touring Europe, making appearances at many of the leading music festivals. She is also set to hit the road with MØ this fall.

Skott spent her formative years in a remote forest community run by a collection of outcast folk musicians. Together they built a small but supportive network, quite far from the nearest populated city. There, surrounded by nature she thrived, learning to appreciate life without all the distractions associated with living in a city. Largely sequestered from contemporary pop culture, it wasn’t until Skott ventured into the city during her mid-teens that she listened to contemporary music for the first time.

Since making her debut last year, Skott has been steadily racking up support online, topping Hype Machine’s ‘Most Blogged’ chart numerous times, with her songs popping up on several Spotify ‘New Music Friday’ playlists and massive radio support from the likes of Annie Mac (Radio 1), Zane Lowe (Beats1) and KCRW (Jason Kramer). Described as “mesmerizing” by The FADER, “menacing and magical” by Noisey and “definitely worth paying attention to” by Pigeons & Planes, Skott has even received high profile endorsements on Twitter from both Katy Perry and Lorde. Most recently VEVO dscvr included the Swedish singer in their ‘Ones to Watch 2017’ list. Check out an exclusive live performance of “Porcelain” HERE. There’s no question that Skott is one to watch in 2017 and beyond.