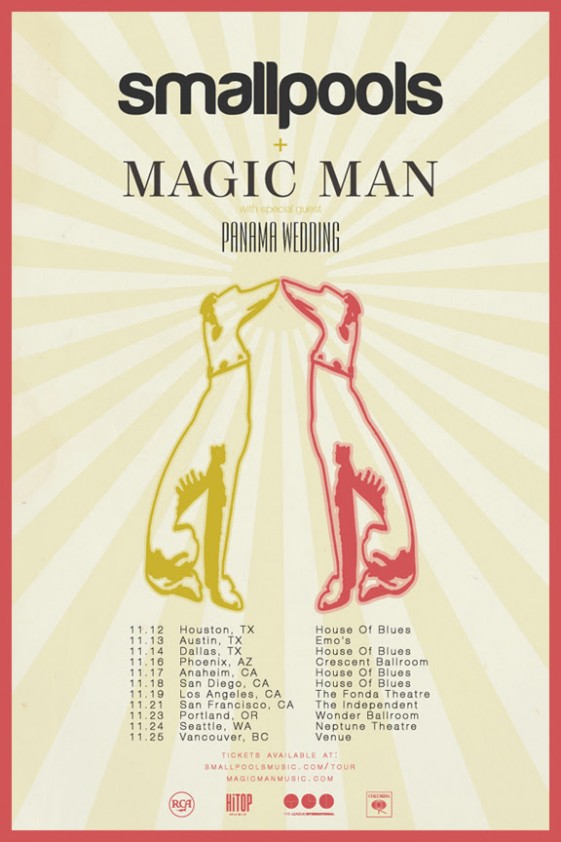 Today, Los Angeles’ quartert Smallpools announced their fall North American headlining tour. Smallpools will be joined on the road by Magic Man and Panama Wedding on select dates. Select dates along the tour are part of the Live Nation “Ones To Watch” tour as well.

Smallpools consist of Sean (vocals/keys), Mike (guitar), Joe (bass) and Beau (drums) and are currently in the studio putting the finishing touches on their full-length debut for RCA Records. They released a 4-song Smallpools EP last summer have been touring consistently for the past year packing rooms nationwide.

The LA band made their national TV debut on Jimmy Kimmel Live, performing their single “Dreaming.”

The release of their self-titled debut EP gained them critical acclaim. Neon Gold calls “Mason Jar” “a sepia splash of power-pop that crystallizes into a starscraping smash before the verse even kicks in, as stadium-sized Of Monsters And Men gang vocals ride high on the buoyant flair of Smallpools’ youthful, Two Door-esque ebullience.” The indie pop band shared a “Dreaming” remix by The Chainsmokers HERE. In addition NYLON Magazine premiered the Charli XCX vs Twin Idol Remix of “Dreaming”. Check out more from their Billboard interview.

Their first single “Dreaming” was produced by Captain Cuts and instantly shot to #1 of Hype Machine within the first 3 days of its revealing. You can hear “Dreaming” HERE.

“Smallpools’ opening statement sounds like it was written to be one of alternative radio’s songs of the summer, with its exuberant, helium-voiced Passion Pit vocal riffage; sparkling, hi-fi production; and young-and-invincible ‘tude.”- Billboard

“Dreaming” is alt radio gold with extreme crossover potential, the kind of song that only comes along a few times a year, and rarely on a debut single.” – Neon Gold