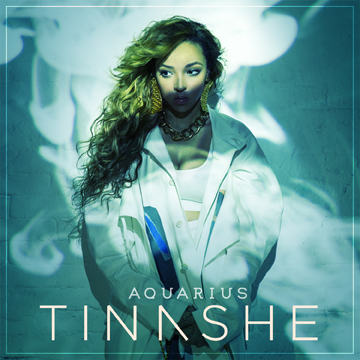 The incredible album effortlessly blends her R&B roots, hip-hop confidence and forward-leaning sonics into a body of work that is distinctly Tinashe. Aquarius features production from the likes of DJ Mustard, Redwine, and DJ Marley (“2 On” featuring ScHoolboy Q), Detail (“Pretend” featuring A$AP Rocky), Stargate (“All Hands On Deck,” “Feels Like Vegas”), DJ Dahi and Blood Diamonds (“Bet” featuring Devonté Hynes), Boi-1da (“Cold Sweat”) and Tinashe herself, among others.

“Ultimately, Tinashe makes a statement with her first offering. This is her moment. She’s on her way to the top, and she deserves the crown. Mainly because she made a dream you’ll never want to awaken from with Aquarius,” says Artist Direct on the album.

Tinashe’s breakout hit and the album’s first single “2 On” Featuring ScHoolboy Q has recently been officially certified Gold. The song, which clocked over four weeks at #1 on the Rhythmic Airplay chart, has been called one of 2014’s songs of the summer by the likes of USA Today, The New York Post, MTV, VIBE, BET, and more. The music video, which has recently surpassed over 25 million views, can be viewed here.

The album’s second single, “Pretend” featuring A$AP Rocky, is already poised to follow in 2 On’s footsteps. The Detail-produced track, of which Stereogum calls Tinashe’s performance a “showstopper” and Complex says it highlights her “tremendous voice”. The official video for “Pretend” was premiered on September 29th and can be viewed here. A behind-the-scenes preview of the music video can also be viewed here.