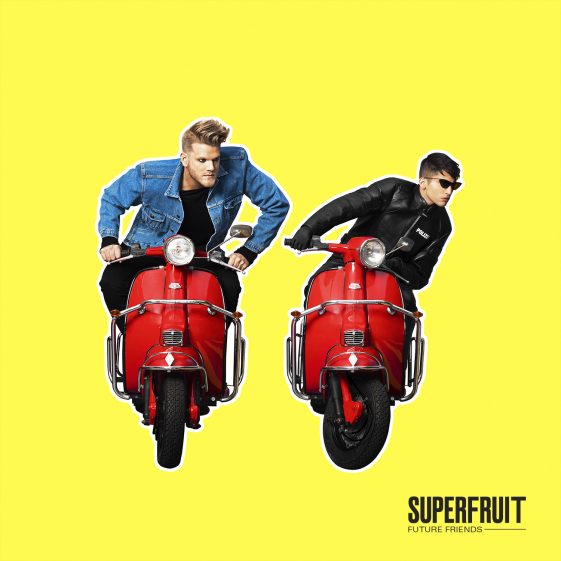 PERFORMS “HURRY UP!” ON THE LATE LATE SHOW WITH JAMES CORDEN

Alongside the release of Future Friends, Superfruit has released a one-shot music video for “How You Feeling?”  The duo has now released videos for the first 8 tracks from the LP.  A music video for “Hurry Up!” will be released next Friday.

All tracks on Future Friends were co-written by Superfruit with the exception of “Fantasy.”  Producers of the new tracks include: Justin Tranter and Shawn Wasabi, Noise Club, Nate Campany and Valley Girl, as well as Future Friends – Part One collaborators Kuk Harrell, Danny L Harle, Caroline Polachek, Pretty Sister and Jussifer.

Superfruit was launched in August 2013 and have since amassed more than 350 million views of their music and comedy videos.  Their musical content has ranged from artist medleys – their Beyoncé medley was hailed “Flawless” by Huff Post and endorsed by Beyoncé herself – to one-take theatrical performances, such as their Frozen and La La Land medleys.  Buzzfeed declared that “Superfruit has turned your hip-hop faves into Broadway Masterpieces” with their “Hip Hop Goes Broadway” videos, the first garnering nearly 9 million views. Superfruit released an animated video featuring their original song “Bad 4 Us” last October, which was praised by Perez Hilton as “a disco soul jam!”