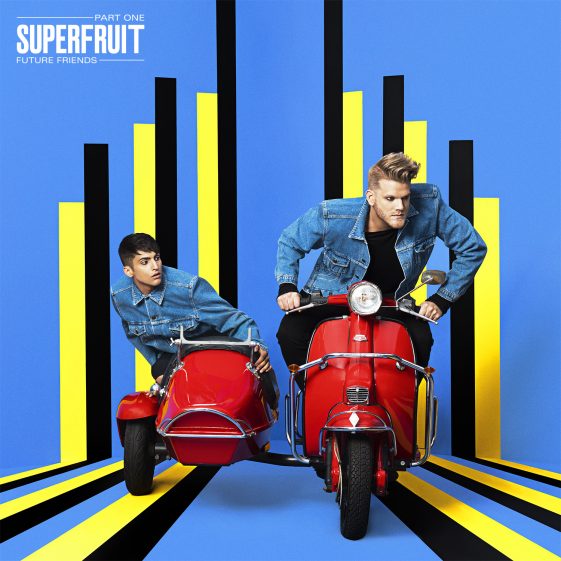 AVAILABLE TODAY ACROSS ALL DIGITAL PLATFORMS

Superfruit is comprised of Mitch Grassi and Scott Hoying of the 3x Grammy Award winning and multi-platinum selling group, Pentatonix. Having worked with various writers and producers on this project including Danny Harle, Caroline Polacheck (Chairlift), SLATERS, ROBOPOP and more, FUTURE FRIENDS is the first installment of the two-part album and the first official music release stemming from Mitch and Scott’s popular YouTube music, comedy and lifestyle channel. They previously released an animated video for “Bad 4 Us” last September and today they released their latest music video for the album’s lead track “Imaginary Parties.”  You can view the video HERE.

Superfruit launched in August 2013 and has since amassed more than 350 million views of their music and comedy videos.  Their musical content has ranged from artist medleys – their Beyoncé medley was hailed “Flawless” by Huff Post and endorsed by Beyoncé herself – to one-take theatrical performances, such as their Frozen and La La Land medleys.  Buzzfeed declared that “Superfruit has turned your hip-hop faves into Broadway Masterpieces” with their “Hip Hop Goes Broadway” videos, the first garnering nearly 9 million views. Superfruit released an animated video featuring their original song “Bad 4 Us” last October, which was praised by Perez Hilton as “a disco soul jam!”