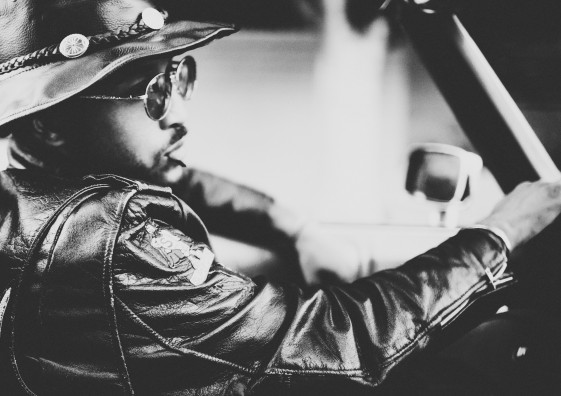 Take Five: Ro James Takes In Some Limited Downtime During His Second SXSW In VIBE

Photos and Story By: Stacy-Ann Ellis for VIBE

Downtime is a luxury, especially as a touring artist. South By Southwest (SXSW) proves to be the source of fatigue for many an artist, as they hop from dive bars to concert halls to makeshift stages alike in the heavy Austin, Texas heat. For Ro James, the buzzing R&B loverboy with distinct sartorial flair, this SXSW was his second go-around.

His last South-By fest was three years ago, following the release of his EPs Coke, Jack and Cadillacs. Now that his debut album El Dorado is on the horizon and he’s on a full fledged promo tour, James geared up for dose number two of the music fest. Here, during a rare break in his schedule, we caught up with the crooner in between Bud Lights at VIBE’s Artist Lounge the Brazos Hall.

VIBE: Tell me about your schedule here at South-By, your whole experience. How many South-Bys have you been before?
Ro James: This is my second one. The first one I did was like three yeas ago, when I released that Coke, Jack, and Cadillacs project. Now I’m releasing El Dorado, so it’s like, three years later, here we are, and I’m doing it again. This time I have three shows: Playstation, ICM and another show…I can’t remember what it is…I think Converse. But, I mean, it’s great. I get to get the opportunity to share. I’m excited!

Do you ever feel overwhelmed? Because I feel a lot of South-By artists are popping from show to show to show and never get a break. What’s been your experience?
You know what? I’m on this promo run right now, so I haven’t been home in about a month. I’m living out this one suitcase, and I’ve been in a different city every day, every night. Sometimes two, and I flew from work last night. I got out of the studio at 2 a.m. and flew on a 6 a.m. flight here. So, I haven’t really rested. [laughs]

Is it taking a toll on your body or are you…
I lost about six pounds!

Damn.
Yeah! Because you know, you’re moving and you don’t eat on your regular schedule, you’re just focused. But, still…

Read the rest of the interview and get more photos now on VIBE.