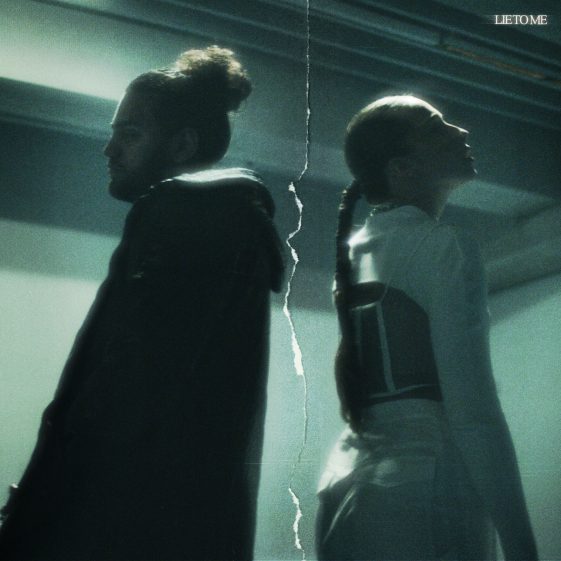 CURRENT SINGLE “you broke me first” HAS NEARLY 300 MILLION STREAMS

(October 14, 2020 – New York, New York) – Rising singer/songwriter/dancer Tate McRae teamed up with fellow Canadian rapper/singer Ali Gatie for “Lie To Me” (click here to listen/watch the music video) via RCA Records.  The Kid Studio (The Weeknd, Drake) directed video was shot in the new Calgary Central Library and features both artists as well as subtle dance movements from Tate herself.  The video made its broadcast premiere on MTV Live and MTVU.

“Working with Ali was a really amazing experience,” says Tate.  “I’ve always loved his music so I’m super stoked to finally release this collaboration. We wrote the whole thing over FaceTime, in quarantine!! It was crazy.”

Tate will make her late night television debut on Jimmy Kimmel Live! on October 21st.  She will perform her current single, “you broke me first” which currently has nearly 300 million streams, is rising up the Top 40 Radio chart and helped Tate to secure her spot in the Top 10 on Billboard’s Emerging Artist Chart. Globally, the track is currently in the Top 15 on Spotify’s Global 200 chart, is Top 25 in over 25 markets on the Spotify Charts and remains on the platform’s #1 playlist Today’s Top Hits for the 6th consecutive week.  the track continues to move up the singles charts at #7 in the UK and #8 in Australia and is Top 5 in Norway at #5 and Top 25 in Ireland #6, New Zealand #13, Sweden #15, Austria #22, and Switzerland #25.  The track is gold in the US, Australia, Canada, Malaysia & Sweden.  Just last week, Tate announced her 2021 UK/European tour which sold out completely in one day.

In just over a year, singer/songwriter/dancer Tate McRae has become the next artist on the rise.  She currently has over 2.6 million subscribers and over 290 million video views on YouTube and has nearly 800 million combined on demand streams to date.  She’s been named one of YouTube’s Artist on the Rise, MTV’s Push Artist for July, received a nomination for a 2020 MTV Video Music Award and performed on the pre-show at this year’s awards.

She released her debut EP all the things i never said, in January which features her standout tracks “stupid” “tear myself apart,” “all my friends are fake,” and “that way” as well as additional tracks “vicious” ft. Lil Mosey and “don’t be sad.”  She has received a praise from a number of publications including Fader, Variety, Idolator, Wonderland, NME, iD, Seventeen, E! Young Hollywood, just graced the cover of UK’s Dork Magazine and so much more.

Raised in Mississauga, Canada, just outside of Toronto, and of Iraqi descent, 23-year-old phenom Ali Gatie has quietly ascended as a singular voice in the culture. Within two years since his first independent release, he’s surpassed 3 billion streams with earworms like “What If I Told You That I Love You,” “Say To You,” “It’s You” and “Moonlight.” He’s quickly proving to be one of the year’s most compelling new artists, straddling the line between pop and R&B. In 2019, he released his debut EP, YOU, achieved RIAA platinum status for his breakout smash “It’s You” (which spent 13 weeks on the Billboard Hot 100) and sold out his first six shows in less than 10 minutes. Cultivating a massive international following and global media attention, Gatie has been covered by the likes of Complex, HYPEBEAST, Billboard, Forbes, Genius, NYLON and more. He goes deep on the big subjects that have always consumed great artists: Vulnerability, love, and devotion are concepts that he confronts head-on. The openness in his music is palpable, and his fans, affectionately dubbed the LISNERS, continue to multiply, hanging on to the edge of every one of his words.