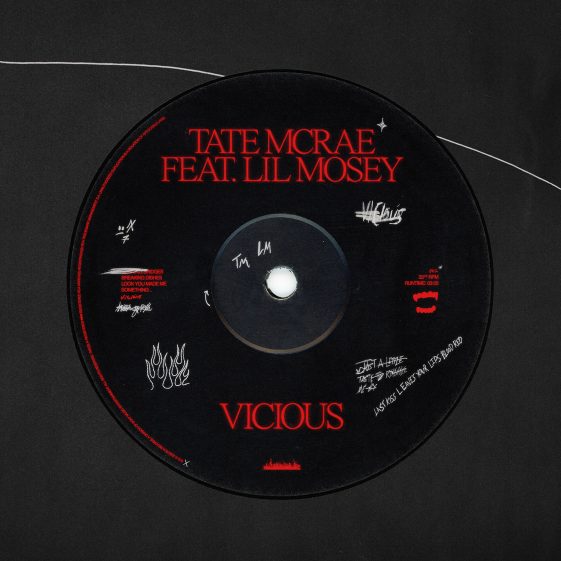 (June 22, 2020 – New York, New York) – Rising Star Tate McRae releases her brand new single “vicious” ft. Lil Mosey via RCA Records (listen & watch here).  The pop driven track was produced by Grammy Award winning producer Mark Nilan.  Tate says of the track, “Super stoked to be dropping vicious featuring Lil Mosey. I’ve always been a fan of his work, so it’s super dope to have a rapper like him jump on this record. Soooo excited for everyone to hear what we’ve been working on!!”

The lyric video was directed by Katia Temkin and Shannon Beveridge and shot by Tate herself.  The video features both live footage of Tate in her bedroom as well as animation that transforms Tate into her alter ego and alternative universe.

“vicious” will be featured on Tate’s upcoming EP due out later this year. The EP will also feature Tate’s recent track, “you broke me first” which has nearly 30 million streams worldwide and over 4 million views on YouTube.

In February, Tate was announced as one of YouTube Music’s Artist on the Rise, YouTube’s emerging artist program that champions breaking talent and rising stars. She is also currently featured on SAYGRACE’s “Boys Ain’t Shit” with Audrey Mika.

Tate released her debut EP all the things i never said, in January and features her standout tracks “stupid” “tear myself apart,” “all my friends are fake,” and “that way.”  The EP has streamed over 200 million times and the various tracks released top notch play listing across all the digital service providers.

Tate continues to see praise from a variety of publications with Fader saying, “Tate McRae looks poised for a breakout year, backed by a promising debut EP.” While TheInterns.net claiming she is, “going to be one of the hottest names in music,” Idolator voting her one of 40 artists to watch in 2020 and E! included her as one of 15 newcomers you need to know.  She has also been featured in Elite Daily, LADYGUNN, i-D, Wonderland, NME, Ones To Watch, The Sunday Times Culture, 1883, tmrw magazine, Billboard, & more.

Tate launched her YouTube channel and her “Create with Tate” music series where she has been consistently releasing original music (check out some here).  In just over a year, she has over 2.2 million subscribers and over 210 million video views on YouTube and has over 350 million combined on demand streams to date.