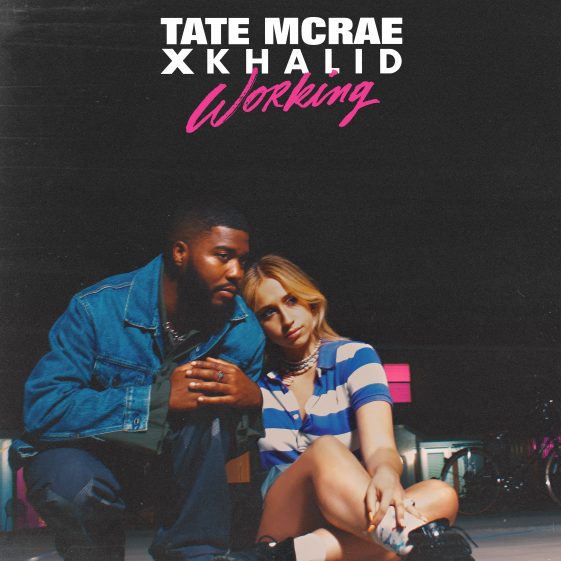 “I am so stoked for this song I did with Khalid.  I usually release a lot of songs that are pretty emotional but this one is just a straight summer bop. We had such a fun time creating this song – I seriously can’t wait for everyone to hear it.”

Tate is currently featured on DJ Regard’s #1 Dance hit with Troye Sivan (listen here) which is currently rising up the Top 40 chart.  She is also featured on blackbear’s recent track “u love u.”  Her TOO YOUNG TO BE SAD EP is also available here.

Tate’s breakout single, “you broke me first” reached #1 at Top 40 radio and has over 1 billion stream worldwide.  The track is currently top 5 at Hot AC, helped Tate to secure her spot in the #1 spot for 5 weeks on Billboard’s Emerging Artist Chart and was #1 at dance radio last year.  The track is not only double platinum in the US, but 4x PLATINUM in Ireland, 3x PLATINUM in Australia and Singapore, 2x PLATINUM in Canada, Malaysia, Mexico, Norway and Sweden, PLATINUM in the Austria, Netherlands, South Africa, Taiwan and the UK, and GOLD in Denmark, Germany and Indonesia.

Singer/songwriter/dancer Tate McRae has become the artist on the rise.  She currently has over 2 billion career streams with over 3.3 million subscribers and over 500 million video views on YouTube.  She was listed on Forbes 30 Under 30 List for 2021 as the youngest musician on the list as well as Apple’s Up Next Artist for 2021, Amazon’s Artist to Watch in 2021, Pandora’s Artists To Watch 2021 list and included on Billboard’s 21 Under 21 One’s To Watch list. She was also named one of YouTube’s Artist on the Rise, and MTV’s Push Artist for July 2020.

Multi-platinum selling global superstar Khalid, who was named one of Time’s Most Influential People of 2019, has taken the world by storm since his first single, the 5x platinum “Location” (released right before his high school graduation) exploded onto the scene leading to a major label deal with Right Hand Music Group/RCA Records followed by the release of his debut album, the double platinum certified, American Teen. His sophomore album Free Spirit, released to critical acclaim in 2019, was declared a New York Times “Critic’s Pick” and was called “superb” by the Associated Press. The album, which has been certified platinum by the RIAA, debuted at #1 on the Billboard Top 200 and features the Grammy nominated multi-format #1 single “Talk”. Free Spirit has garnered over 5 billion worldwide streams. Khalid, who has been called a “pop prodigy” by Rolling Stone has been streamed over 16 billion times worldwide across all partners, has been nominated for 6 Grammys and has won numerous awards including 6 Billboard Music Awards, 3 American Music Awards, a Teen Choice Award, a MTV Video Music Award and a MTV Woodie Award. Khalid has collaborated with some of music’s biggest stars including his #1 singles “Love Lies” (with Normani), “Eastside” (with Halsey and Benny Blanco) as well as hits with artists Billie Eilish, Shawn Mendes, Marshmello and more. The Mayor and Council of the City of El Paso honoured Khalid with a “Key To The City” marking September 13th, 2018 “Khalid Day.” Khalid, alongside his mother, launched The Great Khalid Foundation, which is committed to helping families by alleviating a burden of need. Khalid recently wrapped up his “Free Spirit World Tour” which took him to arenas all over the globe in 2019. Khalid kicked off 2020 by releasing his critically acclaimed track “Eleven” and his smash “Know Your Worth” with Disclosure. Khalid was recently named the youngest artist to reach 15 billion streams on Spotify alone and was just named BMI’s Songwriter of the Year (alongside Post Malone.)