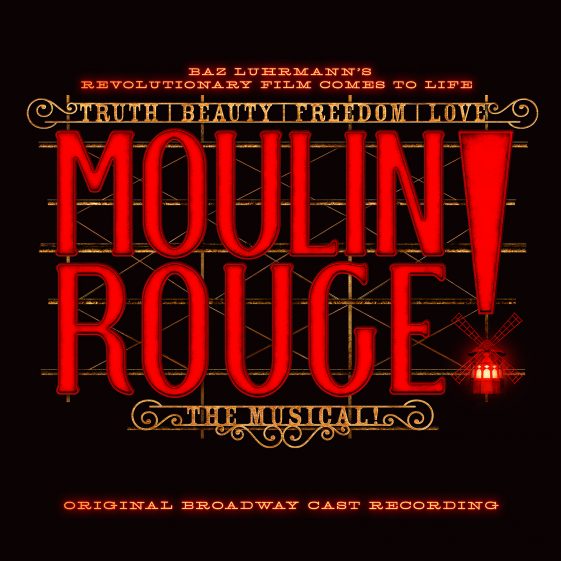 Based on the 20th Century Fox Motion Picture by Baz Luhrmann

“The Sparkling Diamond” From the Original Broadway Cast Recording

Digital Release of Full Album to be Released August 30

(August 23, 2019, New York City) The producers of Moulin Rouge! The Musical and RCA Records have released a single of “The Sparkling Diamond” track from the highly-anticipated Original Broadway Cast Recording of Moulin Rouge! The Musical (click here to listen). The full album will be released at all digital and streaming providers on August 30 via Baz Luhrmann’s label, House of Iona, and RCA Records. Fans who pre-order the digital album will receive an instant download of “The Sparkling Diamond.” A physical edition of the album will be made available at a later date.

Moulin Rouge! The Musical is now playing at Broadway’s Al Hirschfeld Theatre where it opened to rave reviews on July 25, 2019 (previews began June 28).

The cast of Moulin Rouge! The Musical is led by Karen Olivo (Tony Award® for West Side Story, In the Heights) as Satine, Aaron Tveit (Catch Me If You Can, Next to Normal) as Christian, Danny Burstein (six-time Tony Award®-nominee, Fiddler On the Roof, Cabaret) as Harold Zidler, Sahr Ngaujah (Tony® and Olivier award-nominee for Fela) as Toulouse-Lautrec, Tam Mutu (Doctor Zhivago, Encores!’s Hey, Look Me Over! and The New Yorkers) as The Duke of Monroth, Ricky Rojas (Burn the Floor) as Santiago and Robyn Hurder (Nice Work If You Can Get It) as Nini.

As in Baz Luhrmann’s film, Moulin Rouge! The Musical celebrates some of the greatest popular music of the last 50 years. The stage musical features many of the iconic songs from the movie and also includes recent hits released since the movie premiered 19 years ago.

Released by 20th Century Fox, Baz Luhrmann’s Moulin Rouge! premiered at the 2001 Cannes Film Festival. At the 74th Academy Awards, the film was nominated for eight Oscars, including Best Picture, and won two.  The soundtrack for the film was nominated for a Grammy Award for Best Compilation Soundtrack Album for a Motion Picture, Television or Other Visual Media in 2002.

Tickets are available at ticketmaster.com and in person at the Al Hirschfeld Theatre, 302 West 45th Street. Hirschfeld Theatre box office hours are Monday through Friday, 10am to 8pm. Group discounts are available for groups of 12 or more through Group Sales Box Office at Broadway.com by calling 1-800-BROADWAY x2 or online at www.broadway.com/groups. Moulin Rouge! The Musical offers a $29 (plus $5 service charge) “Lucky Seat” lottery. For more information go to https://moulinrougemusical.com/.

Baz Luhrmann is a multi-hyphenate storyteller and record producer, known best within the world of music for his work on the soundtracks to his film and TV projects, as well as for the 1998 album Something for Everybody, which included the BPI (UK) certified platinum song “Everybody’s Free (To Wear Sunscreen).” Luhrmann produced the two-volume, multi-platinum soundtrack for his second film, Romeo + Juliet, and served as the executive producer on the multi-platinum, Grammy-award-winning soundtrack for his third film, the musical Moulin Rouge!. He also co-produced many of the album’s tracks under the pseudonym BLAM and received writing and arranging credit on two of its most iconic numbers, “El Tango De Roxanne,” and “The Pitch (Spectacular Spectacular).” Luhrmann co-wrote various score pieces for his fourth film, Australia, in addition to co-writing and coproducing “The Drover’s Ballad” along with Elton John. Luhrmann was nominated for another Grammy, together with Jay-Z, for their work on the soundtrack to The Great Gatsby. Additionally, he produced The Orchestral Score for the film, as well as The Bryan Ferry Jazz Recordings. Throughout his career, Luhrmann has worked with a vast array of musical artists, from pop icons, to emerging bands, and stars of the opera. In 2015, Luhrmann signed a deal with RCA to launch his own label, House of Iona, under which he released the two-part soundtrack for “The Get Down,” his Netflix series about the birth of hip-hop. House of Iona will also be home to the upcoming soundtrack for Luhrmann’s Untitled Elvis Presley film.