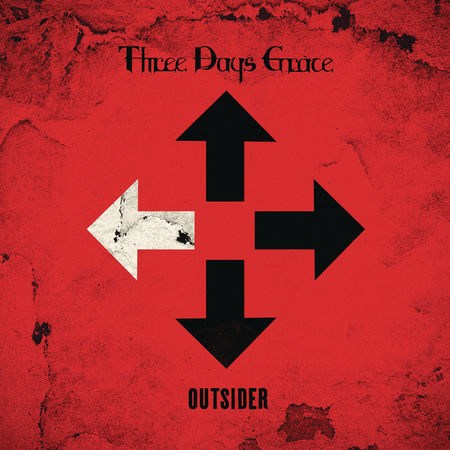 This morning, Three Days Grace debut “I Am An Outsider,” the second track from their forthcoming album, Outsider (March 9th, RCA Records), along with the album’s tracklisting via Billboard, who say “I Am The Outsider” “…defines both the theme of Three Days Grace’s upcoming album Outsider and the Canadian band’s lyrical outlook in general.” Drummer Neil Sanderson spoke to Billboard about the process of creating the new album and the band’s upcoming tour dates. Read Billboard’s interview and listen to “I Am An Outsider” here.

Recently, Three Days Grace debuted their new music video for the song  “The Mountain” which Alt Press called a “…seismic new single” and has been streamed over 3.5M times on YouTube alone. The song is the #1 greatest gainer on the Active Rock Chart for the second week in a row, and currently top 10 on the Billboard and Mediabase charts. Taped at a UFC octagon, the music video for Outsider’s first single was directed by Sean Cartwright, and features a cameo by UFC fighter Misha Cirkunov.

Three Days Grace, the internationally acclaimed and multi-platinum certified Canadian band with over a billion streams on Spotify, will release their new album, Outsider, on March 9th via RCA Records. Outsider is the sixth full-length album from the band, and is their latest since 2015’s chart-topping album Human. “To me, Outsider represents the journey to find your place,” says bass player Brad Walst. “The world feels crazy at times. We try to get away from that every once in a while. We do our own thing, and we’re comfortable doing it. We have always looked forward—and not backwards. That’s an ongoing theme.” Preorder Outsider on all formats here: http://smarturl.it/3DGOutsider

BUY/STREAM New Single “I Am An Outsider”: http://smarturl.it/3DGIAAO