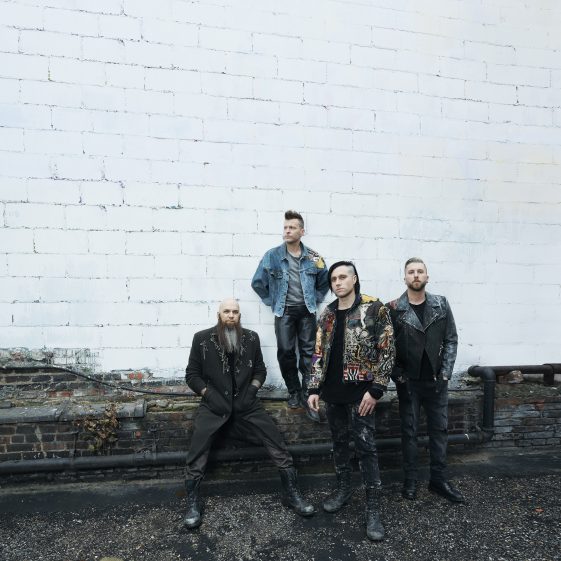 Three Days Grace Top The MediaBase Active Rock Chart With Their 14th #1 Single, “The Mountain” — Adds To All Time Record Of #1 Singles Already Held By Band

On Tour This Summer with Avenged Sevenfold and Prophets of Rage

(New York- April 2, 2018) Three Days Grace, the internationally acclaimed and multi- platinum certified Canadian band with over a billion streams on Spotify, today makes chart history once again, by claiming their fourteenth #1 single on the MediaBase Active Rock Chart with their current single, “The Mountain.” The band already held the all-time record for most #1 singles in the format, and last week, they matched Van Halen‘s two-decade stronghold of topping the Billboard Mainstream Rock Songs Chart with their 13th #1 single. The song is also #1 on BDS’s Active Rock chart. “The Mountain” is featured on Outsider, their sixth full-length album and fifth consecutive charting Top 40 debut on the Billboard Top 200 album chart.

Recently, Three Days Grace also debuted “I Am An Outsider,” the second track from their forthcoming album, along with the album’s tracklisting via Billboard, who say “I Am The Outsider” “…defines both the theme of Three Days Grace’s upcoming album Outsider and the Canadian band’s lyrical outlook in general.” Read Billboard’s interview with drummer Neil Sanderson and listen to “I Am An Outsider” here. The band also debuted their lyric video for “Right Left Wrong,” the third track revealed from their forthcoming album via Revolver who call it a “propulsive new song.” Check out “Right Left Wrong” via Revolver here.

Three Days Grace will be touring with Avenged Sevenfold and Prophets of Rage- tour kicks off July 22nd in Mansfield, MA at the Xfinity Center. See tour dates below or CLICK HERE for more information.

“To me, Outsider represents the journey to find your place,” says bass player Brad Walst. “The world feels crazy at times. We try to get away from that every once in a while. We do our own thing, and we’re comfortable doing it. We have always looked forward—and not backwards. That’s an ongoing theme.” Purchase Outsider on all formats here: http://smarturl.it/3DGOutsider

Given this undeniable unpredictability, Outsider feels right at home alongside a catalog of fan favorites from Three Days Grace. Since 2003, the band has staked a spot amongst the hard rock vanguard, breaking records, toppling charts, moving millions of units worldwide, and making history by holding the all-time record for “most #1 singles at Active Rock Radio ever” with 14. In 2015, Human marked the group’s second straight #1 slot on the Billboard Top Hard Rock Albums Chart as well as their fourth consecutive debut in Top 20 of the Top 200. It spawned two #1 singles “Painkiller” and “I Am Machine,” signaling their 13th overall and 5th consecutive number ones on the Active Rock Radio chart. Moreover, the four-piece consistently averaged a staggering 3.9 million monthly listeners on Spotify—remaining one of the most listened to rock bands in the world. In 2012, Transit of Venus soared to the Top 5 of the Top 200 and garnered a nod for “Best Rock Album of the Year” at the Juno Awards. The seminal One-X [2006] notched an RIAA triple-platinum certification as Three Days Grace [2003] was minted platinum and Life Starts Now went gold. To date, their veritable arsenal of number one includes “Chalk Outline,” “The High Road,” “Misery Loves My Company,” “World So Cold,” “Good Life,” “Break,” “Never Too Late,” “Animal I Have Become,” “Pain,” “Just Like You,” and “Home.”

*With Avenged Sevenfold +  Prophets of Rage plus very special guests

BUY/STREAM track “I Am An Outsider”:  http://smarturl.it/3DGIAAO