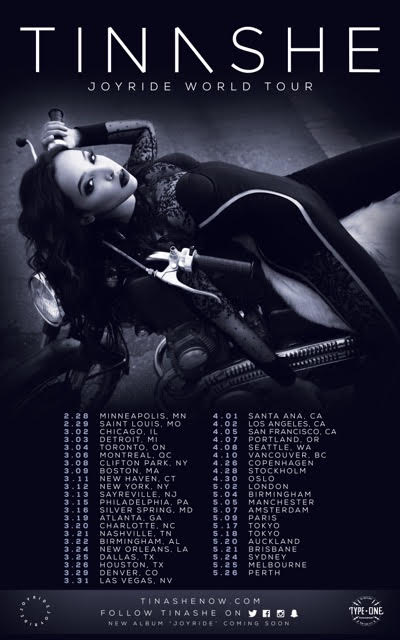 Tinashe Announces First Round Of Dates For The Joyride World Tour

RCA Records recording artist and entertainer, Tinashe, is excited to announce the first round of tour dates for the Joyride World Tour. Her second world tour, the multi-continent trek will kick off on February 28, 2016 in Minneapolis, MN at Mill City Nights. The 28-date North American leg will visit cities throughout the United States and Canada, with stops planned in New York, Los Angeles, Chicago, Toronto, Boston, Atlanta and more. Following the American run, the tour will head overseas with stops planned across Europe, Asia and Australia later this spring.

Tickets will go on sale to the general public on Friday, January 15, 2016. Fans can go to www.tinashenow.com to purchase tickets. Full, official tour dates can be found below. British DJ duo Snakehips, who recently collaborated with Tinashe on the hit song “All My Friends,” are set to join the singer along her Joyride World Tour. Specific dates will be announced in the coming weeks.

The singer-songwriter, dancer and producer, is quickly making a name for herself as a live performer. After releasing her 2014 critically lauded debut album, Aquarius, Tinashe toured relentlessly, taking her live show around the globe several times over, including sold-out shows across North America, Europe, Asia, Australia and the Middle East. Tinashe spent the summer of 2015 touring arenas and amphitheaters on Nicki Minaj’s The Pinkprint Tour and ended 2015 touring stadiums and arenas in South America with Katy Perry. Known for her intense, captivating and energetic command of the stage, Tinashe is quickly becoming one of the most celebrated live performers today.

The new tour takes its name from Tinashe’s upcoming sophomore album, Joyride. The album itself is a direct result of over a year on the road, with the energy and thrill of Tinashe’s show weaved directly into the album’s in-your-face DNA. The album is set for release later this winter on RCA Records fresh off the heels of multi-format hit single “Player” featuring Chris Brown and previously shared track “Party Favors” featuring Young Thug.

The album will feature Tinashe’s own production work along with such big names as Max Martin, Metro Boomin, Nic Nac as well as reunite her with past collaborators Boi-1da and Devonté Hynes. Already, anticipation is at a fever pitch, with Tinashe recently covering Dazed Magazine’s current Winter 2015 issue and Essential Homme’s October/November 2015 issue, as well as attention from Vogue, Nylon, Billboard, Rolling Stone, Entertainment Weekly, Glamour, Cosmopolitan, Playboy and much more. With more information on the album to be announced soon, 2016 is shaping up to be Tinashe’s biggest year yet.