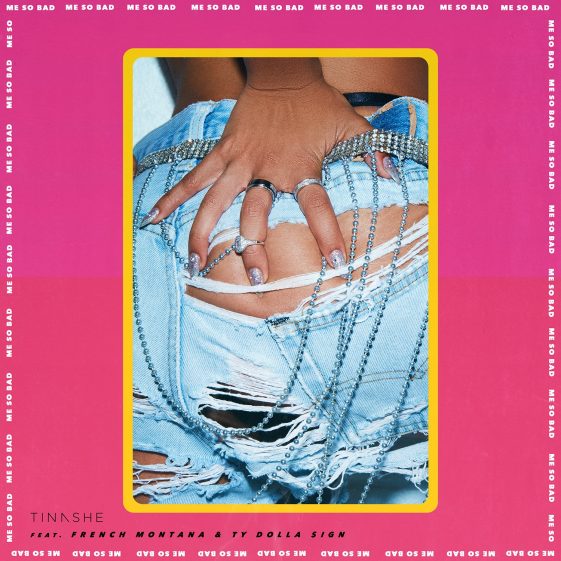 March 30, 2018 – Los Angeles, CA – In much anticipation of her upcoming sophomore album TINASHE has today released a third single called “Me So Bad” featuring Ty Dolla $ign and French Montana. The collaborators came together just in time for the Spring season for an infectious track and hyper color music video – play the new single HERE. “Me So Bad” wraps up a trilogy of singles released by Tinashe off Joyride; ahead of its April 13th release date.

Hot off the heels of SXSW, where Tinashe “dominated the stage winning several audible gasps for the sheer athleticism — and sensuality — of her performance” (Austin 360), she took to social media to share the coveted track listing for Joyride, revealing Little Dragon as the secret female collaborator. The thirteen track album boasts a menagerie of other features including previously heard tracks with Offset on lead single “No Drama” and recently released “Faded Love” with Future. Joyride is available for pre-order now at all digital retail providers via RCA Records and fans who pre-order the album will receive “Me So Bad” feat. Ty Dolla $ign and French Montana as instant-grat upon purchase along with “No Drama” and “Faded Love.” For a full list of tracks and features, please see below.

Co-mingling seductive R&B, edgy pop, and a nocturnal electronic sensibility, Los Angeles, CA based Tinashe emerged as a fascinating, focused, and fiery outlier in 2014 with her full-length debut Aquarius. Powered by the double-platinum smash “2 On” [feat. ScHoolboy Q], the album crashed the Top 20 of the Billboard Top 200 upon arrival before popping up on year-end lists by Pitchfork, Rolling Stone, Cosmopolitan, Stereogum, The Guardian, Vulture, and so many more. Between touring alongside everyone from Katy Perry and Nicki Minaj to Maroon 5, she revved up the official mixtape Nightride. Rolling Stone and Fuse both proclaimed it among the “20 Best R&B Albums of 2016.” Along the way, she graced the covers of Complex, V, Dazed, and Nylon in addition to turning up with unforgettable performances on The Tonight Show Starring Jimmy Fallon, Conan, and Jimmy Kimmel LIVE! Tinashe’s rise to conquer the industry has been limitless and an exciting one. Not bound by anyone’s box or idea of who and what Tinashe means, she embraces the gray area and continue to prepare the next chapter of her story with the release of her sophomore album.

Buckle up for Joyride…