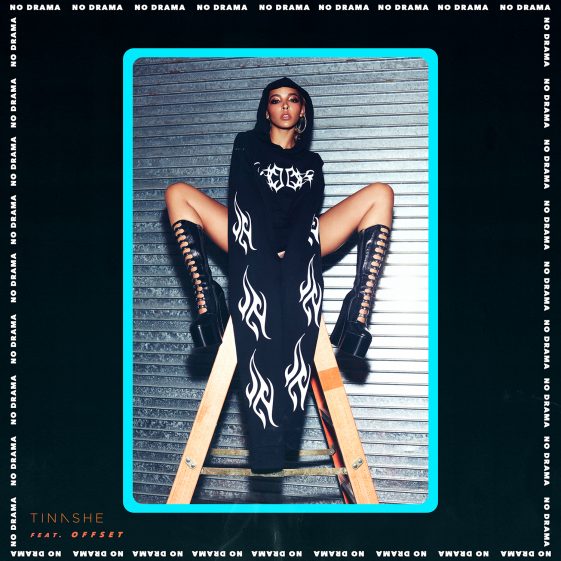 Official Music Video for “No Drama” To Be Released Today at 4:30PM ET via MTV’s TRL

January 18, 2018 – Los Angeles, CA – After teasing fans with sneak peeks and billboards plastered all over Sunset Boulevard, CA; singer, songwriter, producer and entertainer, TINASHE, has today released a new single titled “No Drama” featuring Offset. The lyrically charged track, now available on all DSPs was produced by Stargate and will have an equally explosive visual treatment that premiers later today on MTV’s TRL – check local listings for exact timing. The new single and upcoming video showcases, once again, the young 24-year old’s multi-hyphenated prowess. Listen to the new single now!

Co-mingling seductive R&B, edgy pop, and a nocturnal electronic sensibility, Los Angeles, CA based Tinashe emerged as a fascinating, focused, and fiery outlier in 2014 with her full-length debut Aquarius. Powered by the double-platinum smash “2 On” [feat. ScHoolboy Q], the album crashed the Top 20 of the Billboard Top 200 upon arrival before popping up on year-end lists by Pitchfork, Rolling Stone, Cosmopolitan, Stereogum, The Guardian, Vulture, and so many more. Between touring alongside everyone from Katy Perry and Nicki Minaj to Maroon 5, she revved up the official mixtape Nightride. Rolling Stone and Fuse both proclaimed it among the “20 Best R&B Albums of 2016.” Along the way, she graced the covers of Complex, V, Dazed, and Nylon in addition to turning up with unforgettable performances on The Tonight Show Starring Jimmy Fallon, Conan, and Jimmy Kimmel LIVE! Tinashe’s rise to conquer the industry has been limitless and an exciting one. Not bound by anyone’s box or idea of who/what Tinashe means, she embraces the gray area and continue to prepare the next chapter of her story.

Buckle up for a joy ride…