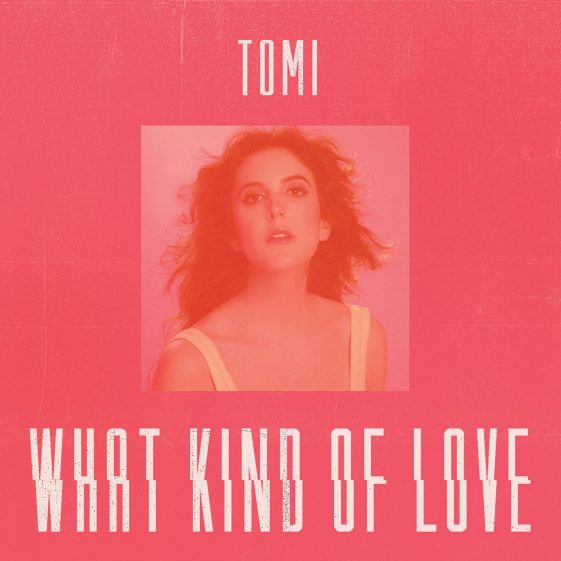 MAY TOUR DATES WITH AMY SHARK

Brooklyn, NY-based artist TOMI today announced her new EP, What Kind Of Love, which will be released on May 18, 2018 via RCA Records. She also shared the anthemic title track first single, which can now be heard HERE.

TOMI explains, “We all experience different versions of love, even in just one person. There is kind love, destructive love, boring love, obsessive love, drunk love, the list is endless. I spent this past Thanksgiving in Las Vegas, and it was a beautiful trip aside from a panic attack: ‘Every now and then I feel you coming up behind me.’ A lot had changed for me in a short period of time. I had been in a relationship for three years with someone who couldn’t quite figure out how to love me. It made me wonder if something was wrong with me. When we broke up, I felt a weight lift, and then as I fell in love with my current partner, I felt the weight pour back over me, even stronger this time. ‘Always crumble underneath your feet.’ The protagonist in ‘What Kind Of Love’ is love itself. I’ve always been obsessed with love stories and the inexplicable why: Why do we do the things we do? Why do we sacrifice ourselves for someone else? And why is love so hard to explain? My panic attack ended but the question lingered on: ‘What kind of love’ would make you feel so out of control?”

A deft guitarist and powerhouse on stage, TOMI will showcase new songs with her band throughout a New York City residency beginning on April 9th: three headlining shows at Baby’s All Right (4/9), Elsewhere Zone One (4/16), and Pianos (4/23). In May, she will head out on the road in support of Amy Shark for a two-week tour beginning on May 12th in Albany, NY. TOMI will end the west coast run with a headlining show at LA’s The Echo on May 29th. Tickets for all shows are on-sale now. A current itinerary is below.

On the What Kind Of Love EP, TOMI is singing for her life and, in turn, lighting the way out of darkness for her listeners. The culmination of a journey towards self-empowerment, TOMI (who has been writing songs since she was a kid) here fully realizes her voice even as she sings about finding it, integrating all her past experimentation and influences into sonically vast yet lyrically personal episodes. Whether it’s the raw protest at a lover’s cruelty in “What Kind of Love” or the elegiac regret of “Think About It,” the lyrics are instantly accessible, while the sound is epic in its sweeping range.

TOMI’s style is characterized by ferocious guitar and resounding vocals—an unfettered, urgent, and emotionally supercharged sound that was forged from a ruthless determination to sing, play, and do things her own way, even in the face of life’s obstacles. This method of creating is hard-earned. As a new arrival to New York, she grinded her way through the punk scene, midnighting at dive bars while she supported herself with dull administrative day jobs. After she got fired from her day job as an investment bank secretary, she started honing in on the intense, expansive set of sounds first demonstrated on “Carry You,” a vulnerable, bluesy ode to a lover who’s halfway out the door. TOMI channeled her frustrations into what would become her raw and emotive 2017 debut EP, Used To, and RCA Records signed her on the strength of early demos.

The April dates will be TOMI’s first shows of the year since playing a sold-out headlining show at Elsewhere Zone One in December. She recently completed her debut tour, opening for Electric Guest, which included her first-ever show at a sold-out Music Hall of Williamsburg in Brooklyn.

TOMI Shares Video For “What Kind Of Love”

TOMI Shares New Single “Every Morning I Feel Like Running Away”