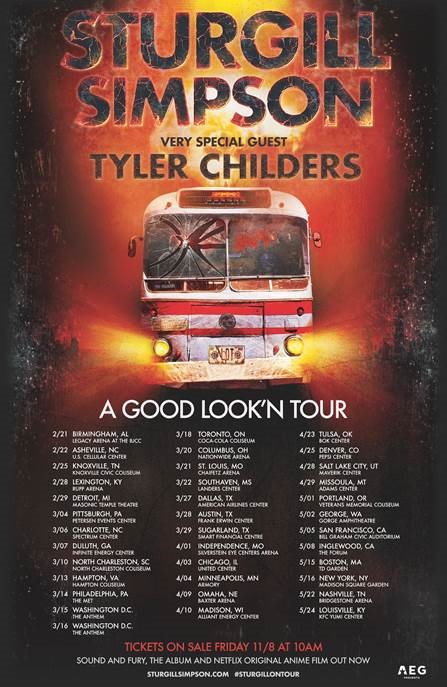 Acclaimed singer, songwriter and musician Tyler Childers will tour extensively throughout 2020 as part of the newly confirmed “A Good Look’n Tour” with Sturgill Simpson. The tour kicks off February 21 at Birmingham’s Legacy Arena at the BJCC and will continue through the spring including stops at Lexington’s Rupp Arena, Los Angeles’ The Forum, Washington DC’s The Anthem (two nights), George, WA’s The Gorge Amphitheatre, Chicago’s United Center, New York’s Madison Square Garden and Nashville’s Bridgestone Arena among several others. Tickets for the shows will be available for verified pre-sale starting next Tuesday, November 5 at 10:00am local time with general on-sale following next Friday, November 8 at 10:00am local time.

These performances add to a landmark year for Childers, whose critically acclaimed new album Country Squire debuted at #1 on Billboard’s Top Country Albums chart with over 32,000 equivalent units sold. Released on Hickman Holler Records/RCA Records, the album was produced by Simpson and David Ferguson and recorded The Butcher Shoppe in Nashville. Stream/purchase HERE.

In celebration of the release, Childers recently performed his new single “All Your’n” on “Jimmy Kimmel Live!” as well as “Whitehouse Road” as a bonus web exclusive.

^with special guest Daughter of Swords

BOLD on-sale next Friday, November 8 at 10:00am local time