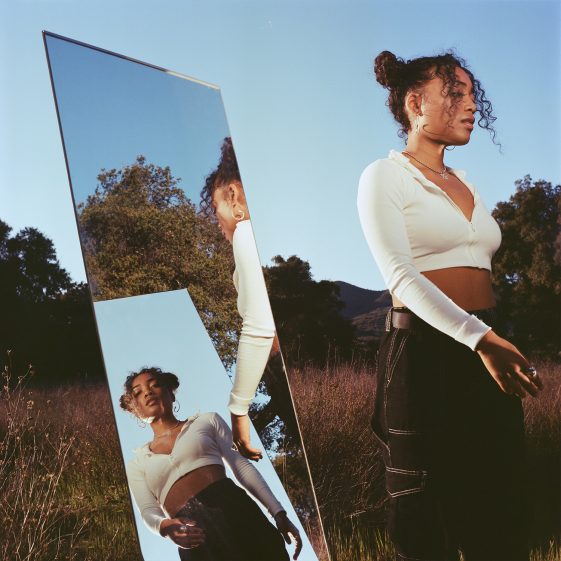 June 22, 2020—The Introspection EP from rising Japanese-African-American artist UMI is out now via Keep Cool/RCA—listen here. The EP, which officially dropped yesterday timed to the moon’s position in Cancer, arrives alongside a short film co-directed by UMI and her friend Jocelyn Woods, a writer, director and designer. Filmed in Los Angeles and produced with Issa Rae’s production company Raedio, the short film offers an intimate look into the deeply personal emotions and experiences that inspired the EP—watch here.

“Introspection is a reflection of my journey inward. I’ve never been more honest in my expression of self, and I hope that it serves as a reminder that our highest healing and growth comes from within,” UMI says. “The film is an extension of the music, creating a world for viewers to live in. The story is an apt visual metaphor for how interconnected life and our individual experiences really are. Unpacking themes of self-discovery, love, heartbreak, and family dynamics, Joce and I hope that people can find themselves in the film—that it can serve as a mirror inward.”

“Introspection started as a three-hour conversation with UMI in a bathroom,” Woods says. “It turned into a two-day retreat in Malibu, throwing any idea onto the page. Soon it became a treatment, then a script and now a movie. There were countless late nights and early mornings, but every moment has been meant. This project is a milestone of growth. It’s been beautiful to fully trust in ourselves, our ideas, and each other. Now we have a film, and I couldn’t be more excited for the world to see it.”

The EP features previously released tracks “Pretty Girl hi!”—of which E! wrote “The rising R&B star absolutely soars on this sun-soaked latest single, “Open Up” and “Introspection”— which Ones to Watch praised for UMI’s ability to situate “issues like race, identity, and love into velvety smooth tracks,” as well as three new tracks. The project follows two standalone singles from earlier this year—“Mother,” UMI’s celebration of Mother Nature that was unveiled on Earth Day and “Picture Perfect.”

In 2019, her visual EP Love Language was released via Loud Robot, the music label from J.J. Abrams’ Bad Robot. UMI wrote and produced the EP—featuring tracks “Love Affair,” “Sukidakara,” “Runnin” feat. Yeek and “Breathe”—in Los Angeles and worked with a team including writer Taofik Kolade (“Atlanta,” “Barry”) and director Will Kindrick (Brian Wilson, Ice Cube, Mates of State) to write, cast, animate and direct the EP’s four episodic components. On Love Language, UMI explores race, intersectionality and how love is given and received through the lens of her experience as a mixed-race woman in the music industry. She toured the EP last fall with Conan Gray.

UMI, born Tierra Umi Wilson, is a 21-year-old songwriter, vocalist and producer raised in Seattle and now based in Los Angeles. A former University of Southern California music student, UMI dropped out to focus on her unique R&B sound, acclaimed by Complex, Coup de Main, E!, Nylon, Ones to Watch and more. Her debut EP Interlude was released in 2018, featuring “Midnight Blues.”